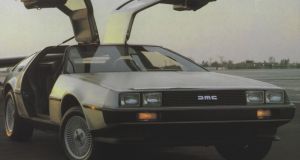 It is 30 years since the only car ever built in Belfast was immortalised on the big screen in the hit Hollywood blockbuster Back to the Future. But the factory in Dunmurry where the DeLorean DMC-12 sports car was all too briefly manufactured has been celebrating a milestone anniversary of its own.

Montupet, the French- owned car components manufacturer which took over the Dunmurry factory 26 years ago today employs more than 600 people at its only UK site. Its Dunmurry factory produces cylinder heads for the global car industry including General Motors, Ford, Peugeot and Citroën.

This year alone, the plant has won two major new contracts which, according to its managing director Jim Burke, will deliver a £14 million (€19 million) investment boost for Belfast.

Burke, who also celebrates his 26th anniversary with Montupet this year, says the latest contracts not only safeguard local jobs but also highlight the wealth of engineering skills and talent that the French company has nurtured in the North since it first arrived.

Last week Montupet’s chairman Stéphane Magnan confirmed that the board of the French company would support the Canadian takeover bid.

While the drama continues to play out at board level, it will be business as usual at the Dunmurry plant which, according to Burke, has earned a reputation for delivering within its French family.

“We are regarded highly within Montupet. We may have started out as novices 26 years ago but today we have a significant amount of experience and the engineering talent in Belfast to provide the answers to whatever the customer needs in terms of design and capability.

Burke says one of the reasons Belfast has flourished in an increasingly competitive marketplace is because of the confidence its diverse customer base continues to place in it.

“We’ve built very good relationships with customer design teams and this in turn has fostered trust and confidence in our ability. We are producing more sophisticated product design and lighter components result in more fuel efficient engines.

“From our perspective, the more intricate the design, the better. We’ve established, high quality standards and because we are very vigilant, we are very successful in preventing any field or warranty concerns that our customers might have to contend with,” Burke adds.

Given the ongoing furore over Volkswagen’s recent emissions scandal, vigilance is likely to play an increasingly important role when it comes to the car industry in general.

Tomorrow as every Back to the Future fan knows was the date the time travelling DeLorean whisked Marty McFly and Doc Brown to save the past in the future.

Montupet’s Belfast plant might not quite be able to manufacture a time machine yet but its workforce will be determined to show any new owner that it definitely has a bright future.