Encirc employs 1,000 people and has annual revenues of more than €300m 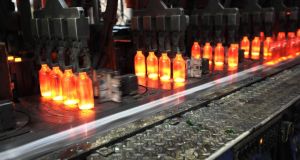 Lazard, the international investment bank, is handling the sale of Quinn Glass which was renamed Encirc at the start of the year. Photograph: Brenda Fitzsimons

The sales process for the former Quinn Glass, the most valuable part of the manufacturing empire built by entrepreneur Seán Quinn, has entered its second phase this week after initial bids were received for it last Friday.

Lazard, the international investment bank, is handling the sale of the business which was renamed Encirc at the start of the year. A spokesman for the company confirmed yesterday: “Encirc is currently engaged in a sales process which is unlikely to conclude for a number of weeks.”

He declined to comment on the level of interest in the business which employs 1,000 people at facilities in Derrylin, Co Fermanagh and Cheshire, England. Encirc has annual revenues of more than €300 million and its plants are considered among the best in Europe.

Staff were informed that the business was to be put on the market some weeks ago by management of the group installed by a consortium of international investors who own the former Quinn business which is now called Aventas.

External private equity investors and trade players are also looking at the company. Dublin financier Paul Coulson the head of glass maker Ardagh, a traditional rival of Quinn, is understood not to be bidding for the business.

QBRC, which includes a number of skilled former managers from the Quinn Group, is not currently engaged in bidding for the glass business.

Market sources speculated that a private equity bidder might want to team up with them in the future.

QBRC, which is led by former Quinn chief executive Liam McCaffrey is only weeks away from completing a €90 million purchase of the packaging and construction supplies units of the former Quinn Group.

Strategic Value Partners, a long-standing shareholder in Aventas, as well as Silverpoint, another long-term investor and a third financier all backed this bid by former Quinn Group senior executives.

1 Should my mam wait for house prices to drop before buying?
2 Cheers: Conor McGregor's whiskey races up the sales chart
3 Joint accounts: if one of us dies, can the other access the money?
4 Two prominent business leaders in planning row with neighbour
5 ‘I’m so lucky to be in the Caribbean – a million miles from Derry Girls’
6 Battle for control of America’s mammoth utility industry set to intensify
7 US ‘hard seltzer’ drink White Claw launches in Ireland
8 ‘I have a talent for justifying purchases’
9 Why we’re about to learn if we are really in the A-team
10 Help, I’ve no PRSI stamps – can I still get a pension?
Real news has value SUBSCRIBE