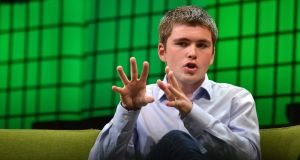 John Collison. co-founder of Stripe, is the youngest self-made billionaire on Forbes list.

Limerick brothers Patrick (28) and John Collison (26), cofounders of payment service Stripe, have made the Forbes billionaires list for the first time, joining the ranking of the world’s richest as the youngest newcomer billionaires.

The Collison brothers, who are based in California, join fellow 20somethings Snapchat cofounders Evan Spiegel and Bobby Murphy, in the newcomer club, while John has the added prestige of also being the world’s youngest self-made billionaire, as he is two months younger than Spiegel.

The arrival of the Collisons on the list means that there are now eight Irish billionaires. The highest ranked Irish billionaire is Pallonji Mistry (77th) with a €14.3 billion fortune, followed by John Grayken (215); Denis O’Brien (348); Campbell soup heir John Dorrance III (745); Dermot Desmond (1,030); and Martin Naughton (1,234).

O’Brien saw his fortune fall by $1 billion from March 2016, while Desmond’s fortune rose by €100 million, as did Naughton’s.

Overall, the survey shows that the number of billionaires jumped 13 per cent to a new high of 2,043 from 1,810 last year, as their total net worth rose by 18 per cent to $7.67 trillion, also a record. US President Donald Trump saw his fortune fall by about $1bn to $3.5bn the survey shows, putting him in 533rd place.

Microsoft’s Bill Gates is the world’s wealthiest person for the fourth year in a row, with a fortune of $86 billion, up from $75 billion last year, followed by Warren Buffett.

Amazon’s Jeff Bezos had the best year of any person on the planet, adding $27.6 billion to his fortune; now worth $72.8 billion, he moved into the top three in the world for the first time, up from number five a year ago.

The number of female billionaires also reached a new high, at 227, making up 11 per cent of the list with a collective net worth of $852.8 billion. For the second year running, France’s Liliane Bettencourt is the world’s wealthiest woman with a $39.5 billion net worth. She is followed by Alice Walton, the only daughter of Wal-Mart founder Sam Walton.

The US continues to have more billionaires than any other nation, with a record 565, up from 540 a year ago. China is catching up with 319, while Germany has the third most with 114. India, with 101, the first time it has had more than 100, is fourth.

4:02 Complaint made against ESB over purchases of coal from Colombian mine