LayerLabz provides 3D printing at a price you can afford 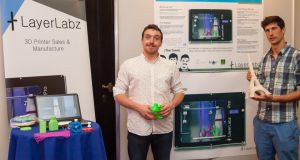 When DIT product design student Alan Donnelly discovered he could make his own 3D printer out of salvaged printer and computer parts, an idea, and a business, was born.

“At college, I was using commercial (3D printing) machines that cost up to €500,000. I noticed I could make one for about a grand.”

After graduating, he teamed up with childhood friend Robert McGrath, a marketing, innovation and technology student at Dublin City University, to develop the idea for a 3D printing business further.

“I was on my own at the start and wasn’t getting anywhere. Like a lot of people, I didn’t know I could get investment simply for having an idea.”

“Once we were chosen as one of eight successful start-up companies in the 2014 UStart competition, we virtually went from working in a garden shed at the back of my house to a 1,000 square foot workshop overnight,” Donnelly says.

In addition to workspace in the Liffey Trust building in Dublin’s docklands, the pair were given an apartment to live in rent-free for the year, €5,000 in seed funding to get their business off the ground.

A huge amount of work “The free apartment is great. We live together and work together. We often stay up until the early hours of the morning writing presentations or preparing to make an important pitch. Starting your own company is a huge amount of work – it’s basically like having a kid as you have to make sure it’s doing well all day and all night,” Donnelly says.

The duo developed a prototype and trialled it in a handful of schools. They then modified the printers to suit what each school wanted.

One challenge they faced when introducing 3D printers to schools was the safety aspect. They didn’t want a situation where young children could stick their hands into the printer and get injured. As a result, they designed a printer where the door can be closed and completely sealed off.

Since receiving their initial investment from DCU, the company has gone from strength to strength. They recently secured a €50,000 investment from Enterprise Ireland, made it into the final 24 of the Intel Business Challenge Europe competition in Lithuania and have also been shortlisted for the Young Enterprise of the Year awards.

They invested €15,000 in machinery to produce some of the parts in house. Some of the smaller parts are made in China and imported with everything assembled on their production line at DCU.

“We would like to get our printers into schools around Ireland as we feel the area of education is where the biggest uptake is. At the moment, students can design something incredible but the design simply sits in a file on the desktop of the computer. The students cannot physically make and hold their idea in their hands. We want to change that.”

They currently have their 3D printers in four schools in Ireland, while 30 to 40 schools in the country have access to one of their printers. They expect that within five years every school and college will own a 3D-printer.

“The best thing about having your own start-up is how exciting everything is. You never know what’s going to happen next. You are also totally in control of your own future and which direction you would like it to go. It’s something different,” Donnelly says. Organised workshops Donnelly and McGrath have also organised workshops aimed at introducing people to the world of 3D printing. They teach participants how to assemble their own 3D printer and then how to use it.

Currently the company is printing with plastic and rubber but it would also like to try out new materials such as metal. It also wants to encourage Irish universities to invest in research and development for 3D printing.

As for the future, the two are hoping to run workshops with some of the larger international companies based in Ireland.

“For example, organising a team building exercise where participants will be able to scan a 3D model of themselves onto the computer and then print it out in 3D. I don’t think anything like that has ever been done before so it would be pretty incredible,” Donnelly says