Kingspan faces remuneration vote, Kildare Village and Brexit and no passion at work 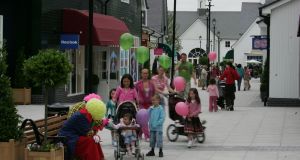 Kildare Village retail outlet. Value Retail, the owner of the centre, has shifted control of its almost €6 billion European portfolio of outlets centres from the UK to its Irish operation.

Insulation giant Kingspan faces the prospect of a number of shareholders voting against its remuneration policy next Friday as a leading advisory firm criticised pension, share bonus and severance arrangements for top executives, reports Joe Brennan.

Value Retail, the owner of Kildare Village fashion retail centre, has shifted control of its almost €6 billion European portfolio of outlets centres from the UK to its Irish operation, in a move that the company says was spurred by Brexit. Mark Paul reports.

British entrepreneur James Caan is looking to invest in three additional Irish recruitment companies as he deploys up to £40 million (€46.3 million) as part of a strategy to create a recruitment group with about 60 constituent companies. Peter Hamilton has the details.

Irish radio and advertising executives will stick for now with the current method of calculating radio audiences after an alternative listener “diary” approach was found to yield similar data in tests,writes Laura Slattery.

The new all-Ireland electricity market that came into effect last October has led to increased volatility in prices in the wholesale market, and a number of occasions when power companies were forced to pay commercial customers to accept their excess energy, according to Dublin-based energy trading company. Joe Brennan reports.

With vital economic issues from Brexit to a global trade deal on the agenda, Irish business lobby group Ibecis calling on businesses to play an active part in promoting the importance of the upcoming European parliament elections, writes Michael McAleer.

Business and consumer sentiment rose in the State in April as the threat of the UK crashing out of the EU without a deal eased as the date of its departure was pushed back by seven months to the end of October, according to a new report from Bank of Ireland, writes Joe Brennan

Chris Johns wonders who would be a central banker these days?

Emma Jacobs has had it with all this passion talk.

1 Admission of mistake in Oxford vaccine dose raises doubts over reliability
2 Anti-alcohol zeal of public health experts peppers reopening debate
3 ‘I don’t need to do any of this. . .I don’t actually need to work.’
4 Promontoria barred from pursuing doctor over Ulster Bank loan
5 Move to EU or face disruption, City of London is warned
6 Online shoppers face unwelcome tax surprise
7 White knights or loan book cannibals – what will happen at Ulster Bank?
8 Fiona Reddan: Who’s afraid of Revolut? Not AIB and BOI it seems
9 Topshop owner fights for surivival putting Irish jobs at risk
10 Cliff Taylor: Deal or no deal we are now heading for a hard Brexit
Real news has value SUBSCRIBE