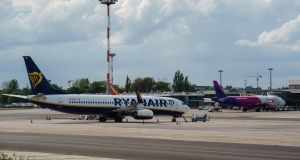 Listed Irish companies have raised more than €1.44 billion in shares sales since the onset of the Covid-19 crisis, with more seen following suit if stock markets maintain their gains over the past five and a half months, according to equity market experts.

Ryanair became the latest Iseq company to tap the stock market, raising €400 million in a share placing on Thursday evening in a move designed to strengthen its balance sheet amid the pandemic, and take advantage of “significant growth opportunities” as its rivals run into trouble.

The placing came just days after hotel group Dalata sold €94 million of shares to investors to bolster its finances and help fund further expansion in London, after reporting a near €71 million loss for the first half of the year.

The biggest share sale so far this year has been the €900 million-plus placing by Paddy Power owner Flutter Entertainment in May. The company said at the time that the transaction would cut its debt burden amid an uncertain market after merging with Canadian rival Stars Group – and give it the financial flexibility to chase opportunities that might fall out of the Covid-19 crisis.

“I think that a number of companies will see from the deals that have gone through that there is an opportunity to raise equity in the market to get ahead of potential balance sheet issues. It’s not just the good news stories that investors are willing to back,” said Bernard Byrne, head of capital markets at Davy, the State’s largest stockbroking firm.

“Equity markets are showing that there is strong investor interest in companies that have been affected by the crisis but have strong management teams. They are willing to take the long-term view and help position companies to take advantage of opportunities than might arise.”

Another senior market source who advises public limited companies on funding said: “Both [the Dalata and Ryanair deals] were easily placed, so that could encourage others, depending on how Covid and the company and the economy unfold over the coming months.

“For stocks not paying annual dividends, equity is an attractive form of permanent non-repayable capital, so you can see the attractions versus debt or sale-and-leasebacks [of assets],” said the source, who declined to be named.

The Iseq has rallied almost 50 per cent from its lows in March, when global equity markets tanked as the virus spread at pace through western economies. Still, the Dublin market remains 12.4 per cent lower over the year to date.

European markets on the whole have traded within a narrow range over the past three months, following a strong rebound between mid-March and early June that had been driven by central banks pumping trillions of euro into markets in an effort to avert a fresh financial crisis.

US stocks, measured by the S&P 500 index, reached an all-time high, fuelled by technology stocks, in the middle of last week, before stumbling in the last two trading sessions.

Datalex, the travel retail software group rattled by an accounting scandal last year, is among Irish companies known to be looking for an opportunity to raise money.

The company, whose shares resumed trading in July after being suspended for more than a year, has said that it plans to sell shares at some stage before November 2021 in order to repay $12.4 million (€11 million) owed to its largest shareholder, Dermot Desmond, and any other debt he might contribute, as well as to raise working capital.

Mr Desmond pledged in June to provide up to €10 million of additional debt if an equity raise doesn’t take place until well into next year.