Irish rents could rise 25% over next two years

Shortage of supply with less than two per cent of rental properties available, survey finds 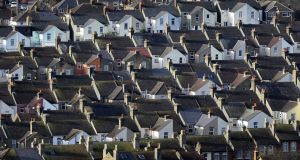 The cost of renting a home countrywide jumped by almost 10 per cent in the 12 months to the end of July with rents in Dublin reaching record levels. Photograph: Gareth Fuller/PA Wire

The cost of renting a home in the Republic could increase by as much as 25 per cent over the next two years because of a shortage of supply and the difficulties people have buying property, it has been warned.

The rate at which house prices have been climbing over the last two years coupled with more stringent lending rules from the Central Bank and sluggish wage growth have led to more people renting for longer, according to new figures published by Savills Ireland.

The research also indicates that less than two per cent of rental properties in the Republic are available for rent with low vacancy rates driving the cost of accommodation in the private sector higher.

The stock of private rented properties in Dublin has gone up by 43,000 over the same period while outside the capital there has been an increase of 24,128, figures which would appear to contradict claims by some estate agents and business associations that landlords are fleeing the market.

The vacancy rate in the sector across the State is now just 1.45 per cent and Savills said there would have to be a 300 per cent increase in vacant units needed before rents will stabilise

“With rents back to boom-time levels, income yields on residential property are much more attractive than the returns that are available to investors who leave their money in the bank or buy a bond,” said Savills research director Dr John McCartney said. “On top of this, investors are generating wealth from capital appreciation – it’s a no-brainer for people with the cash.”

He said house price inflation, sluggish wage growth, weakened household balance sheets and tight mortgage lending “have conspired to drive people who would otherwise have been owner-occupiers into the rented market. At the same time social housing tenants are increasingly being housed in private rented accommodation. This has driven a huge increase in rental demand.”

Savills has calculated the long-term mathematical relationship between vacancy rates and rental growth. This is then used to forecast residential rents into the future. Based on three alternative vacancy rate scenarios the model predicts compound rental growth of between 22 per cent and 26 per cent between now and the end of 2018.

1 Irish company paid €1.2m a year by collapsed Blumenthal-linked Australian restaurant
2 Should AIB compensate me for upsetting letter on arrears?
3 Legal eagles yet to land; economy to grow 3.4% this year; and CEOs on social media
4 Irish economy to grow by 3.4% this year, predicts EY
5 ‘I wouldn’t be a big saver. I tend to buy now and repent at leisure!’
6 Hugo MacNeill steps back from Goldman Sachs role
7 Why bosses should not be afraid of speaking out on Instagram
8 Poll on second election, concerns over Irish pension gap, and Ireland’s rich list
9 Tax shifts won’t drive multinationals out of Ireland - Moody’s
10 Chris Johns: The Johnson administration will spend, and needs a quiet Treasury
Real news has value SUBSCRIBE