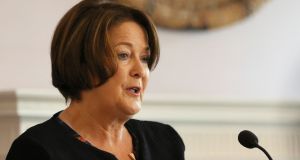 Ires CEO Margaret Sweeney’s basic salary rose by 21.2 per cent last year to €400,000, while the maximum level of her bonus was increased from 100 per cent to 150 per cent of her salary. Photograph: Nick Bradshaw

Shareholders in Irish Residential Properties Reit (Ires) have been advised to vote against a resolution on the company accounts in protest over the fact that large increases in the salary and bonuses paid to its chief executive Margaret Sweeney last year were not flagged in its 2018 annual report.

Proxy advisory group ISS has highlighted how Ms Sweeney was granted a 21 per cent increase in her base salary and a 50 per cent rise in her bonus payment for full-year 2019, without it being flagged to investors in the company’s 2018 annual report.

ISS also said there was a “lack of sufficiently compelling rationale” to warrant the increases, adding that support for Ires’s non-binding resolution to approve the company’s report and accounts was “not considered warranted”.

Listed on the Euronext Dublin stock market, Ires is Ireland’s biggest institutional landlord. The company is due to hold its agm on May 27th.