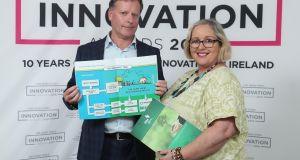 Irish-based international non-governmental organisation Vita has created a novel investment fund which delivers a return to investors through the generation of valuable carbon credits at the same time as helping people in Africa gain access to clean water and more energy efficient cooking appliances.

The key to all of this is the energy saved which translates directly into fewer trees being cut down, according to Vita chief executive John Weakliam. “Our innovation is to be the first Irish organisation to generate carbon credits by working with people in Africa,” he says. “If a woman in Africa has a more efficient stove, they will cut down fewer trees to fuel it. If they have access to clean water, they don’t have to boil it before drinking it. Planting trees is the third strand of the process. It’s about energy efficiency, water and planting. This generates carbon credits which can be sold, and the income used to repay investors.”

The first Vita Green Impact Fund has been running for three years. “We started with a €2 million pilot programme,” Weakliam explains. “We raised the money from blue chip investors with backing from Cantor Fitzgerald and a grant from the Irish government. We rolled out the project to 300,000 people in rural Ethiopia and Eritrea and we measured the carbon savings through Gold Standard, an internationally recognised organisation based in Switzerland. ”

The carbon credits are sold on the voluntary market which enables companies and organisations with a commitment to reducing their carbon footprint to do so by purchasing carbon credits from socially responsible projects that have achieved actual results in emission reduction. This is fundamentally different to the compliance market which is primarily used to trade credits earned through emissions reductions achieved by commercial organisations.

The initial idea for the Vita Green Impact Fund came about through Weakliam’s own experiences of Africa. “I had been working there for 14 years and I realised that Africa had one thing that the West didn’t have,” he says. “It didn’t go through a fossil fuel era or the industrial revolution and was already quite a low carbon society as a consequence. I thought if we could generate energy savings it would be an effective reduction in carbon because it would prevent tree felling. I originally thought it up in 2008 but the global financial crash created turmoil in the carbon credit market and that delayed it.”

The fund has a dual purpose, he adds. “Hundreds of millions of people don’t have access to clean water or an adequate supply of energy while cutting down trees in bad for the planet. We are doing something to address these issues. Ireland committed to doing something both domestically and internationally on climate action and we are offering the country the means to do something internationally. This is an opportunity for Irish companies, the government and ordinary people to do something to reduce their carbon footprints.”

The pilot fund creates 540,000 tonnes in carbon credits annually. “That will be able to generate €1.5 million in annual income over a 10-year period,” says Weakliam. “Investors get repaid with 10 per cent interest. Once they have been repaid after three years, all surplus income can go back into further development.”

The financial model for the pilot saw €1.5 million raised from investors and a further €500,000 from a government grant. Investors receive €1.65 million from carbon credit sales over three years while any surpluses to towards the ongoing overheads of providing stoves, clean water and so on to communities with the remainder going back into further development.

“Later this year we will launch a €20 million Carbon Impact Fund which is based on the successful pilot. Cantor Fitzgerald is on board again as the lead investor and we are very pleased about that.”

Vita now employs eight people in Ireland and a further 80 local staff in Ethiopia and Eritrea. “This innovation will allow Ireland to take a leadership position in this area. It’s the first fund of its kind in the world and the potential to scale this up further is very high. Demand in Africa for what we are doing is huge and demand for carbon savings in western world is huge as well. We are shining a light on the innovation so that others can follow.”