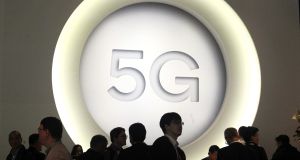 While the usual mobile phone announcements were made - Sony, Samsung, LG and Huawei all unveiled new phones at the event - Mobile World Congress is about more than the hardware.

Internet telephony firm Blueface is set to launch a new video service using browser based web technology. That means no app to download, but users can access the service on both mobile and desktop, and perform more advanced functions like screensharing.

“As a standalone product, it’s slick,” said Alan Foy, chief executive of Blueface. The company said it looked at what was available out there, and decided to build its own video collaboration platform.

In January, Blueface announced it would merge with US rival Star2Star Communications in a $500 million deal. The deal created a global communications company, with its headquarters in the US. The Dublin Blueface office remains the company’s EMEA headquarters.

The product announcement is the first significant move for the company since it merged.

Mr Foy said it would be a game changer for the firm in Europe. He said that while companies in the US had some options - including one provided by Star2Star, Europe was an underserved market in this respect.

“Ultimately this is a brand new product in Europe, and we think customers will definitely embrace it.”

The company plans to roll out the video product to its clients in Europe, and offer the updated version to US customers.

Blueface wasn’t the only one making announcements at the show. Internet of things firm Asavie unveiled new partnerships that take the company into the world of motor racing and renewable energy.

Zyalin, the maker of iKydz took the wrapping off its project, a kid-safe mobile phone that has its software embedded into the phone. That should make it more difficult for tech savvy children to tamper with it, although the iKydz products available to Irish parents already make that claim. The smartphone will be marketed in the Middle East, Africa and Asia Pacific, priced up to $220.

Area22, meanwhile, was at Mobile World Congress to announce Canada-based Koodo Mobile was using its technology for an Amazon Alexa skill that would help customers top up their phones, make sense of their bills, make calls and send texts, all using natural voice commands.

Elsewhere at the event., the future and how technology would shape it was very much the topic of conversation. Talk of 5G and artificial intelligence dominated the event..

Amid its phone launches, Huawei also showed off an AI-powered car that could be controlled via a smartphone - Huawei’s Mate 10 Pro, as you would assume.

Other car companies also made an appearance. Ford annoucned it would be making mobile navigation app Waze available to its customers from April, through AppLink. That means users will only need have the app on their phone and it can become the in-car satnav system, complete with voice commands. Meanwhile, Ford’s executive director of connected vehicles Don Butler said stronger connections between cars and smartphones today can help make autonomous cars safer in the future, such as reducing phone distraction and improving voice-based controls. Working on these now could benefit self-driving technology likely to be used in the future, he said.

Autonomous cars are expected to be major users of the next generation of mobile technology, which is being billed as the tools that will revolutionise the way people and companies use mobile devices.

The industry is hoping 5G will be a much-needed shot in the arm after years of stagnating demand for the gear used to build 2G, 3G and 4G networks. It’s close to implementation, with the first commercial networks based on the new technology set to be built later this year. “We’ll start to see the first deliveries this year, we’ll start to see handsets for enhanced

mobile broadband coming next year, and then we’ll see it start to ramp up from there,” Ericsson chief executive Borje Ekholm said. By 2023, he said, there’ll be a billion 5G subscriptions worldwide. “So it’s a fairly quick ramp-up.”

The new technology can be used not only by consumers, but also by enterprises looking to digitise and remotely control everything from industrial manufacturing to complex surgery. While it’s still unclear exactly which benefits telecoms companies will discover in cellular technology that promises faster downloads and lower latency, Ericsson and its rivals are gaining confidence as agreements with carriers move beyond mere trials.

In December, Ericsson agreed with Verizon to deploy a 5G commercial network in some US markets in the second half of 2018. Nokia said last month it had started operating a commercial 5G radio system in Bellevue, Washington, in partnership with T-Mobile US and Intel Corp.

In Ireland, meanwhile, Vodafone has already begun testing 5G, and Three said it would invest €100 million a year on the rollout of its next generation network as it prepares to go live with the new technology over the next 12 to 24 months.

It offers some hope for those in rural Ireland with poor broadband access, with 5G potentially able to offer fast internet access to previously underserved areas.

“The commercialisation of 5G is picking up pace and will start this year, helped by product standardisation and the emergence of real demand for 5G technologies,” Huawei chief Ken Hu said. “2018 we believe will see very positive progress of 5G.”

While self-driving cars and technology like virtual reality support the prospect of 5G deployments in the mid to long-run, there are also short-term needs that the new generation of networks can answer. High bandwidth and speed will be the first benefits of 5G, Huawei’s Hu said.

But while some companies were looking to the future, others still have an eye firmly in the past. HMD once again mined the vaults for a phone it could resurrect, opting to bring the Nokia 8110 back. The “banana phone” was a hit back in the days when The Matrix was considered cutting edge filmmaking, and like last year’s 3310 comeback, HMD has made a few improvements, adding internet access for a start.

How well the novelty factor holds remains to be seen.

1 Irish tech company Asavie acquired by Nasdaq-listed Akamai
2 PTSB plays down Ulster Bank talk as it sells €1.4bn of loans
3 Am I crazy to consider switching to an Ulster Bank mortgage?
4 Up or down – how much is your Local Property Tax this year?
5 How much state pension will I get next year?
Real news has value SUBSCRIBE