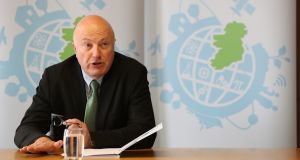 Prof Mark Ferguson, director general of Science Foundation Ireland, at the launch of its annual report.

The organisation said research programmes it backed generated €116 million in non-exchequer funding, of which €70 million derived from the EU with a further €32 million coming from private enterprise and €10 million from international sources.

Approximately 50 per cent of SFI’s budget is committed to its various research centres. A further 40 per cent is allocated in the way of grants for industry collaborations.

According to the organisation, 4,894 publications were reported by SFI-funded researchers in 2017, representing a 17 per cent increase on the prior year.

SFI also said it had more than 300 signed collaborative research agreements with industry partners, representing cumulative company commitments of over €120 million to date, €65 million in cash and €79 million in kind.

Currently, 4,524 people are working on SFI-supported research projects, including 1,038 postdoctoral researchers and 1,451 PhD and masters students.

The organisation said it supported 31,200 jobs in Ireland, either directly or indirectly.