MyNewApp: A mobile app for SMEs – without the mega cost

It shouldn’t cost €50,000 for a start-up to have its own app, reckons Cathal Heneghan 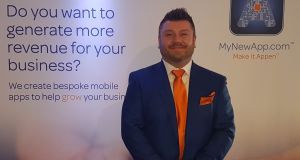 Cathal Heneghan of MyNewApp.com: “I kind of said to myself, why’s it only big companies, the major players, have mobile apps? It’s obviously the price point.”

“The eureka moment, coming up with MyNewApp, was with my brother. He came up with a concept of developing an app and he looked into the pricing of it, the pricing was just off the walls. People are paying €30,000 to €50,000 for an app and it seemed to be an average and nobody batted an eyelid,” explains Cathal Heneghan, founder and CEO of Dublin based start-up MyNewApp.com.

“I kind of said to myself, why’s it only big companies, the major players, have mobile apps? It’s obviously the price point.”

MyNewApp.com creates bespoke mobile apps for the Android and iOS platforms. The concept being the customer only pays for what they require from an app, be it an e-commerce feature, a booking system or push notifications. Heneghan had the start-up and SME market in mind when creating this concept.

“I said to myself, right, think locally, of all the people I know that are in business, I’ve a lot of friends that are self-employed or a couple of people working in the business, they are all still SMEs but they don’t have mobile apps. As I know, from digital marketing, it’s only going one way every single year, the app arena is getting bigger and bigger. The predictions are actually lower than what they come out with in their stats, so the growth is 100 per cent there, but the market doesn’t know because of the price point.”

Heneghan comes from a promotions, networking and sales background, with MyNewApp.com being his first venture as an entrepreneur with a limited company. Having once worked in the bar and nightclub promotion scene in New York, and later energy supply sales, on his return to Ireland he studied for a digital marketing degree, where the ignition to spark his entrepreneurial side began.

“With the idea, I was trying to convey some kind of funnel where people could go and get an app. I knew if I could make it at the right price point there would be a serious business opportunity. There was probably the guts of 12 to 13 months of complete research into companies, talking to people in Ireland, the UK, India, Dubai and Spain. I’ve friends all over the world from my days working in New York, we’ve all kept in contact.

Heneghan claims that on average his company is charging at least €8,000 less than its nearest competitor due to how it has developed the main frame of the app. It’s not a one-size-fits-all but the foundations are the key piece that allows MyNewApp.com to be highly competitive in its market.

“The reason we can keep our costs to a minimum is we’ve created the wire frame and it’s just a matter of us putting in the components, whereas another company will have to start a brand new wire frame every single time. Ours will be nearly 40-50 per cent of the way there constantly, and it’s just a matter of funnelling in the correct requirements, whatever they need based on their needs.”

Heneghan believes that at this stage start-ups and SMEs, especially in the e-commerce area, have little or no need for a website. An app has far greater reach and retention with customers and is far more compliant with social media, according to research, he explains,

“Studies have shown, from the app space, you have a better retention rate on an app, 80 per cent of mobile users are now using apps rather than browsers. 90 per cent of people do not uninstall their apps, which is very high, whereas if you got an email it could go into your spam, you can unsubscribe if it keeps coming every day. Key performance indicators are showing that push notifications are the way forward.

We make a website for them as well, we incur the whole lot, a very basic landing page with a little bit of a bio and then hyperlink straight into the app store, you’re beating your competitor in two clicks, that’s a fact. Apps have a better conversion rate, a better retention rate, much easier to navigate and its way easier to get money out of the consumer’s pocket because there’s an e-commerce platform in the wire frame.”