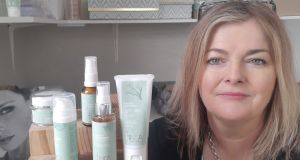 Fegan is an engineer by profession and co-founded an engineering consultancy in Newry at the tender age of 25. She sold it 15 years later to take time out and work with her dad who was turning the family farm into an 18-hole golf course. She then started lecturing in construction and engineering at Dundalk IT where she became aware of the institute’s New Frontiers programme for budding entrepreneurs.

“I had the idea for the product turning over in my mind so I applied for a place on New Frontiers, but I felt very out of my depth,” says Fegan who suffers from rosacea herself. “They were using words like platforms and angels and VCs – terms I’d never heard of and I felt like a complete dinosaur. I was very close to quitting but one of the tutors encouraged me to stay.”

Rosacea is known as the “curse of the celts” and northern Europe and North America are big markets for rosacea products. The condition affects both men and women and there is no cure. It is poorly understood by health professionals and the usual treatment is antibiotics which rarely work. “I didn’t find conventional treatments helped so I began looking at natural remedies and discovered organic rosehip oil,” Fegan says. “I tried it and it felt good – the first thing that really helped my skin. However, it also felt ‘light’ and it didn’t have staying power but I knew it could be used as a base.

“I began to study plant oils and look closely at the ingredients in skincare products to identify which ones can cause sensitive skin to flare up. Essentially, I made my first product for myself combining a blend of plant oils and hyaluronic acid with an eco-approved preservative. Finca offers the natural, plant-based solution to rosacea that people are looking for. They don’t want antibiotics or chemical solutions.”

With the support of Louth LEO Fegan rented space in a building housing other small businesses. There she met a fellow rosacea sufferer who agreed to try her product. “There are two basic types of rosacea and I’m a type 1 and he was a type 2,” she says. “The serum worked well for him so I went online to look for other type 2s who would trial my product. I have a 70 per cent-plus success rate which is in line with the type 2 product produced by the pharma industry. Type 2 rosacea sufferers can have up to six times more of the demodex mite compared to the normal population. Finca works by killing off some of the excess mites. Research had shown that controlling the numbers of mites helps to control the symptoms.”

While Finca is initially targeting rosacea sufferers, Fegan’s long-term plans include a move into the mainstream sensitive skincare market. Her company employs three and its chief financial officer is Catherine McCartan, who was also her partner in the engineering consultancy. Hard cash investment to date is about €80,000 including a small investment by Enterprise Ireland under its Competitive Start programme.

Fegan’s product line-up includes a serum for both types of rosacea as well as a balm, a high sun protection sunscreen and a green tinted primer. Finca products are only available online and earlier this year websites were launched for both the US and UK markets. The US market alone is estimated at $2 billion (€1.79 billion) and one in 10 of the US population has the condition, including the president. “Donald Trump takes antibiotics to help control his rosacea,” Fegan says. “We learned this because he had to make public disclosures about his general health.”