EquiRatings is looking to extend its offering and its reach 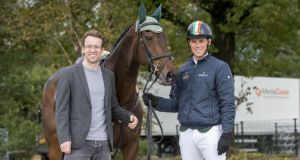 EquiRatings is proving quite the hit within the equestrian world as a sports data and technology company. Initially concentrating on the world of eventing it’s now lending itself to other areas of the equestrian programme. The barriers of “tradition” are beginning to soften in the horse game, allowing tech to prove itself an ally of intuition and gut feeling.

“As I was trying to be a top athlete – I knew the guys I had to catch in the sport, I knew I was competing at the top level but I wasn’t a top athlete,” says Sam Watson, Irish international event rider and co-founder of EquiRatings. “I was not in the top 10, as it were, or challenging for top spot. So I started to analyse the top people in the sport and look at the numbers they produced. It’s a very data-rich sport but because it has got horses involved it’s very much an environment where people think it’s about an experience and it’s about being a horseman. And those things are true to an extent but it’s a very skills-based sport too and skills can be learned.”

Watson, who studied management science and information systems, co-founded the company with his school friend Diarmuid Byrne, a corporate lawyer, when Byrne saw a further need for data in eventing. Having joined Watson at a World Games in 2014 he found that there was no information for eventing fans to follow bar-rider rankings.

EquiRatings launched in 2015 and in 2016 Byrne found himself in the commentary box at one of the sport’s biggest spectacles, Badminton Horse Trials.

“Diarmuid used the first ratings and predicted where they would score on Twitter on day one – we had lots of traction. Day two he ended up in the commentary box. He doesn’t have an equestrian background but was giving an expert view on what was going to happen. By day three he was walking around the warm-up with Claire Balding. It was very quick: just on that one weekend everybody started to think there is something in this, these guys know what they are doing. And I suppose from that then the team that we ended up working with [for the Olympics] probably noticed us there: we were presenting to them about six weeks later.”

EquiRatings was the Leinster regional winner of Best Start-Up Business 2015 at the young entrepreneurs’ programme run by the 31 local enterprise offices (LEOs) with the support of the Department of Enterprise and Innovation and Enterprise Ireland. They won a €20,000 investment.

“IBYE [Ireland’s Best Young Entrepreneur] gave two guys with a good idea an opportunity, it taught us how to build a team, how to build a business and got us our first office space in Carlow. It really facilitated our start and gave us the leg up that was needed,” says Watson.

As the business grew, Watson found that he had less time to spend on his riding commitments and considered retiring from eventing. It was then that he looked at the information gathered in a training capacity and found that using the data collected he could quantify his training, making it more specific and the results proved themselves.

“If you had said that to me in 2016 I would have said that’s crazy even if I spent 100 per cent of my time just focused on eventing I wouldn’t have thought that I would be doing it but that’s the power of purposeful practice.”

He became the first Irish event rider for 40 years to win a medal at a World Games, bringing home silver last year, and broke into the world top 10 event riders’ ranking, a result unmatched in Ireland.

Alongside his own training and fan engagement side of the statistics, EquiRatings stumbled upon another branch to their rapidly-growing company.

“Almost by accident, when we were looking at the high-performance stuff, we saw that at the lower end of the metrics the people who were coming out poorly on this metric were having an awful lot of falls. And we thought: ‘What if we actually try and predict falls? What if we try and turn our attention to that?’ And we did. Sure enough, you could definitely see, at each level of the sport, probably the bottom 5-10 per cent had significantly elevated levels of risk.”

These statistics caught the eye of the International Federation for Equestrian Sports, the international governing body for equestrian sports, which wanted those numbers straight away. This led to EquiRatings working with the main governing bodies in the sport. “We work in Australia, America, Britain, probably about 75 per cent of the world’s data in eventing is coming through our system now.”

Watson is very happy with the pace at which the company has grown and proud that they have managed to maintain the core values despite the rapid interest in their system. Sights have now turned to a funding round and with that an extension into team performance.

“Particularly in a sport like eventing, with VC we could have been taken away from that and maybe \required] to apply our logic or our methods to something completely different, so we just didn’t want to lose control of that. Also, we’ve been very profitable, our revenue last year was over €600,000 and we’ve managed to control all of our overheads, so we’ve been self-sufficient.

“But we want to take the company from a nice lifestyle business for myself and Diarmuid and our small team who’ve been fantastic and brought a lot of skills to the table.

“We know data evolution has happened in baseball, we know it has happened in tennis, in cycling, we know the rest of the world has been there – but we feel that last three years we have really been laying the foundations for people to see that this works in the equestrian world.

“We’ve just been able to solve the problems that no one else has really provided a solution to. We are not completely there, I wouldn’t say that we have any secret sauce that anyone couldn’t copy if they wanted to but I think that we are so dynamic and we are moving so quickly – I think that it’s our ability to turn that data into insight that has been our USP.”

With talk of moving into the wearable technology space and capturing performance footage it looks like EquiRatings could be assisting equestrians to reach heights never imagined before.