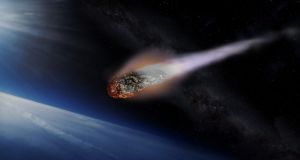 A new mission hopes to one day form the basis for a contingency plan to save humanity from the fate of the dinosaurs. File photograph: Getty Images

A select group of scientists, astronomers and engineers have been meeting in Laurel County, Maryland, weekly to plan an unprecedented space mission. The objective? To build a spacecraft destined to explode.

This may sound like the premise for a spoof science-fiction satire starring Peter Sellers. However, the aim is to launch the missile in the direction of the tiny moon of an asteroid “binary system” named Didymos, the Greek word for twin, which orbits the sun between Earth and the asteroid belt.

The objective is to successfully knock the moon off its trajectory, in an experiment hoped to one day form the basis for a contingency plan to save humanity from the fate of the dinosaurs.

Asteroids have hit Earth in the distant past. And the outcome has rarely been positive. So scientists are looking at ways that a missile from space large enough to destroy civilisation as we know it can somehow be defended against in the future. (Thoughts immediately turn to a different kind of Hollywood blockbuster starring Bruce Willis and Ben Affleck. )

This is significant because it will be the first mission to defend against space, rather than explore it.

The Double Asteroid Redirection Test (ironically abbreviated to DART) is led by a group of experts from Nasa and a research team from the applied physics lab at Johns Hopkins University. They have designed a spacecraft the size of a hatchback, which they plan to launch towards Didymos’s 170m moon.

Powered by solar panels, it will take more than a year for the spacecraft to reach its destination and navigators will be flying it blind for the majority of that time. They won’t be able to see the targeted moon of the asteroid – which is about 800km wide – until the spaceship is just an hour away from it. “That last hour is going to be really thrilling,” the mission’s lead engineer, Elena Adams, said in a recent interview.

The team doesn’t want to smash the missile directly into the moon, causing it to explode and potentially create even bigger problems. Rather the aim is to nudge it with just the right amount of force to delicately alter the speed at which it orbits around the Didymos asteroid, currently estimated to be approximately seven inches per second. “We’re just going to give it a love tap,” said Andy Rivkin, co-lead of the mission and planetary astronomer at Johns Hopkins.

Is this really necessary?

Proponents of DART don’t see asteroids or meteors posing a threat to human safety any differently than they see natural disasters like earthquakes or volcanic eruptions. If we can mitigate the damage caused, why wouldn’t we?

Besides, the idea behind this mission didn’t simply fall from the sky. There have been several examples of meteors and asteroids that came very close to bringing an end to civilisation. In 2013, a meteor was seen shooting across the Siberian sky. Estimates at the time recorded speeds up to 64,400km/h. Thankfully, it exploded mid-air, but still caused plenty of damage in the Russian city of Chelyabinsk, where windows were smashed, a factory roof collapsed and several hundred people were injured, mostly from all the shattered glass.

This meteor, reportedly the size of a school bus, released a force stronger than the atomic bomb that destroyed Hiroshima towards the end of the second World War.

Another meteor explosion in Siberia, in 1908, flattened hundreds of square miles of forests, and was estimated to have equalled the impact of 185 Hiroshima bombs.

It is believed a meteor approximately 8-10km in diameter, which crashed into the Gulf of Mexico 65 million years ago, brought about the extinction of the dinosaurs.

There is little doubt in most astronomers’ minds than an even bigger missile will eventually strike Earth. It could be a year from now or 10,000 years from now. But it’s coming.

While DART may represent the first mission to defend against space, rather than explore it, scientists have kept an eye on all the closest asteroids of a certain size that could be catastrophic were they to be heading in Earth’s direction. “We’re safe from that,” said Paul Chodas, who leads an asteroid search team for Nasa in the California Institute of Technology.

But size isn’t everything. Smaller asteroids pose their own risks, with the potential to unleash megatons of energy too. Even missiles just 1km in length could cause global devastation, if they were to hit the right spot.

I’ll conclude this article – an ideal pub conversation starter by the way – with the kind of cheesy thought you might expect from a Hollywood movie based on the same theme: “Next time you feel like going on a rant about how inefficient the DART is, remember that one day, it might just save your life.”