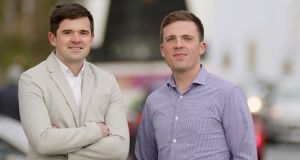 Alan Farrelly and Brian O’Rourke: “we have just signed our first major client in the UK which involves a fleet of 8,500 buses”

The humble bus has been around a long time – since 1895 in motorised form, according to Mercedes-Benz, which claims bragging rights to the first motorised version. Over a century later buses are still with us and thriving.

“Bus transport is estimated to be a larger industry globally than aviation in terms of annual revenues and passenger numbers,” says Brian O’Rourke, co-founder of transport solutions company CitySwifter, which has developed a system to “make urban buses as efficient as Ryanair’s planes”’

The origins of CitySwifter go back to 2016 when O’Rourke and school friend Alan Farrelly linked up to create Huddl, a B2C business that set out to do for private buses what Hailo did for taxis – make them more easily accessible to commuters.

However, in what has been a hectic couple of years for the start-up, the company has changed both its name (due to a trademark issue) and its business model in a major pivot from B2C to B2B having realised that the real opportunity lay in selling its technology not in operating bus routes.

O’Rourke (already a graduate in information systems) first came up with the idea for the business when preparing for his finals in business studies at DCU.

“I had a lightbulb moment when it struck me that there should be a solution for booking private buses online. Bus operators would benefit from the increased utilisation of their vehicles, while passengers would benefit from better access to a quality shared transport network. It was a win-win solution. Alan’s family have been in the bus transport business for over 35 years, and this gave us access to good quality industry information for our feasibility study.

“Our original idea worked to a certain extent and we received some steady and promising early traction,” O’Rourke adds. “But ultimately the scalability of the model was unachievable and it was going to be hard to break even. The Dublin Bus strike, which happened around the time we launched, worked in our favour early on, but when it ended it was difficult to maintain the volumes as we couldn’t accept the LEAP card and Dublin Bus also upped their frequency. The good thing was that our technology stood up so it was then a question of how best to use it.”

CitySwifter’s lucky break came when the DCU Ryan Academy arranged a meeting for the founders with Robert Montgomery, a former CEO of Dublin Bus and ex-managing director of one of the UK’s largest bus companies.

“We built a relationship with Robert and took him on as an advisor. This enabled us to get a unique understanding of the UK market, the operational challenges companies faced, and insights into their inability to use data to solve those challenges.

“Buses are still a major form of transport. In Dublin over 125 million journeys are completed by bus each year, and even in London twice as many people are moved by bus as by the underground at 2.6 billion versus 1.3 billion annually,” O’Rourke says.

“Our system will work in any country, but we are starting in the UK where the market is privatised. Our target market is bus companies operating high frequency routes in big urban centres, and we have just signed our first major client in the UK which involves a fleet of 8,500 buses. We also have deals pending with two other companies, including one with operations in 14 European countries.”

“We’re doing for buses what low-cost airlines did for aviation – addressing inefficiencies,” says O’Rourke. “However, unlike the aviation industry, the urban bus hasn’t evolved with the advancements in technology. Current bus networks are largely outdated, and most operators are not using data analytics to optimise them.

“By using a combination of big data and predictive analytics we can adjust frequency to ensure shorter lay-over times, avoid the crush of over-full buses and make routes generally more efficient.

“We are also able to predict what the passenger demand is going to be at each bus stop, and how long the bus will take along each route of the network in the future. This enables the bus company to create the most passenger-adapted schedule possible.”

O’Rourke says the company’s platform has generated a lot of interest because bus operators know their networks are inherently inefficient and unreliable, not least because their timetables are static while other external variables, such as traffic and weather conditions, constantly change.

What’s also changed is how people use buses. Historically they went from A to B on one bus. Now CitySwifter’s research has shown that they typically travel further – from A-D – and make two or three changes along the way. However, many bus companies have not altered their operations to reflect this shift in behaviour.

“We give the operators the tools and insights to predict, plan and react to these variations in advance, which results in efficiency gains, improved profitability and an enhanced service for passengers,” says O’Rourke. “New entrants such as ride-hailing companies have put increased pressure on bus networks, and the bus is being forced to adapt to remain competitive and retain market share.”

CitySwifter is based in Galway, where it employs six people. This is expected to grow to 17 by the end of the year.

“We have recruited some of Ireland’s most talented mathematicians, computer and data scientists, and currently have two employees who got the highest results in maths in the country when they sat their Leaving Certificates,” O’Rourke says. Investment in the company to date has been around €140,000 through personal funding and support from Enterprise Ireland. The company is now revenue-generating.

Another lucky break for CitySwifter, and key to its success in getting a foothold in the UK market, was landing a place on a transport-focused accelerator run by Wayra (Telefonica’s start-up arm) and Catapult (the UK government’s R&D hub for intelligent mobility) in Milton Keynes. Over 60 international start-ups applied and just seven were chosen.

“This programme gave us the confidence to approach big corporates in the UK, and we’ve also been working closely with Telefonica’s Smart Steps team and been given access to their anonymised and aggregated mobile phone network data. We are beginning to use this to optimise urban bus networks in pilot projects with major bus companies,” says O’Rourke.

“Our decision to pivot was definitely the right one as just recently we’ve seen a number of tech start-ups (that raised millions from investors) fail with a similar business model. I guess the most painful part of the pivot was having to go back to the drawing board with the technology stack having built it out for B2C for the previous 18 months. However, the foundations were strong, we knew what worked, and this gave us a head start when it came to redesigning it for B2B.”