DARPA: Looking towards technologies for 2040 and beyond 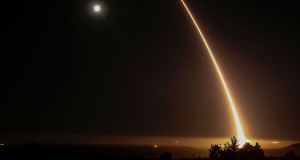 The Defense Advanced Research Projects Agency (DARPA) continues to be five steps ahead of the competition globally.

Driving innovation in numerous technological fields at levels no other funding agency can match, it helps when you have the budgetary support of the US military. But it’s the agency’s unique approach to funding collaboration which has also led to its many triumphs.

The list of technologies DARPA can be credited for is pretty astounding. From the moon landing to the internet, driverless cars to robotic limbs, the US military’s research arm is interested in more than simply combat.

“DARPA is already considering technologies for 2040 and beyond,” says Lokesh Joshi, vice-president for research and Stokes Professor of Glycosciences at NUI Galway.

Combat, security and defence tend to be the starting points from which the agency’s interest in specific research areas begin but the outcomes almost always benefit society more generally too.

“DARPA is a federal funding agency but it doesn’t necessarily address big societal problems – health and wellness, climate change and other ‘megatrends’ – directly in the way, say the Irish Research Council tries to,” says Prof Alan F Smeaton, director at the Insight Centre for Data Analytics in DCU.

“It only cares about major societal issues if they relate to defence.”

As cold-hearted as this may sound, numerous of these so-called ‘megatrends’  fall under the umbrella of defence – ICT, health, data analysis, etc.

“So on the face of it, even though they’re defence budget funded, there are very few few things DARPA doesn’t care about,” adds Smeaton.

This is what makes the agency’s approach to funding research so novel. By bringing research groups together from different schools, universities and even countries, it can make major technological transformations possible.

“The organisation was created in order to allow rapid evolution of big, disruptive technology. However, the wars in Afghanistan and Iraq led the organisation to also launch efforts that could impact the warfighter – as DARPA was uniquely positioned to push innovation to the battlefield.”

Programmes such as TIGR – a tactical intelligence gathering support programme for field-based combat – would often become decade-long ‘experiments’ that not only directly led to US military successes but also found applications in other settings.

Recently DARPA officially separated its research activities purely focused on the service of the US military through the creation of the Adaptive Execution Office (AEO).

“This separate wing of the agency was created under Regina Dugan – an Obama appointee,” says Shakarian. “Despite Dugan’s departure, AEO still exists but as DARPA changes leadership it will be interesting to watch if AEO continues in its current form or is refocused/disbanded.”

To clarify, DARPA does not conduct any research itself. Rather it seeks out innovation elsewhere and finds ways to support it, be it financial or otherwise. Universities are perhaps the greatest beneficiaries of DARPA support.

Jamie Winterton is the director of strategy for Arizona State University’s Global Security Initiative. Winterton co-ordinates and participates in defence and security related research, with a special emphasis on cybersecurity and chairs the university’s DARPA Working Group.

“In my mind, DARPA is working on some of the most exciting, high-risk/high-reward research out there,” she says.

“It is taking huge leaps forward because the agency’s intent is to fund research that is “revolutionary, not evolutionary”.

We have several DARPA Young Faculty Award winners at ASU, working on swarm robotics, brain–machine interface, restoring hearing loss through genetic editing, and advances in wireless communications. Some of the really intriguing conversations I have with DARPA programme managers, however, are in the social sciences – questions about how we model and simulate social behaviour, or how humans can partner with machines to better understand the huge amounts of data that surround us.”

Research on exoskeletons for use in a military setting is one of the best examples of how DARPA-backed research can benefit the wider population. While its emphasis may be on the development of military body wear that could give foot soldiers super human strength, this kind of technology could, for example, be adapted to assist people with walking disabilities.

“If one could get over the military ethos, I think it would be one of the best organisations in the world to work for,” says Smeaton. “They’re the most futuristic.”