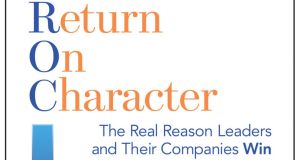 Character flaw is a well-recognised concept in leadership with numerous examples of rogues at the top of major business corporations. Invariably, these villains come to a sticky end, causing huge reputational damage. Think Ernest Saunders at Guinness or Kenneth Lay at Enron. The flip-side of this attracts less attention. Does having excellent character contribute positively and sustainably to the bottom line?

That is the central question posed and answered in this book by Fred Kiel, a veteran adviser to Fortune 500 companies and co-author of an earlier work moral intelligence. Unsurprisingly, the answer is in the affirmative but Kiel also presents a wide body of hard evidence for this proposition.

A seven-year study of 8,000 employees and 84 chief executives and top teams at major corporations by his company, KRW International, suggests that a character-driven chief executives and their teams deliver as much as five times greater returns for their organisations as those run by so-called “self-focused leaders”.

Character is defined as a unique combination of beliefs and habits that motivate how a person relates to others. Character is also defined by behaviour, especially how we treat other people.

The four keystone habits of what the author describes as “virtuoso” chief executives are integrity, responsibility, forgiveness and compassion. The value a leader brings to their organisation is determined by a combination of character and a set of business skills such as vision, good decision making, accountability and team development. Together they account for an organisation’s return on character.

Kiel debunks the traditional notion of good leadership being about rational self-interest, in the tradition of Adam Smith. Such a simplistic view of human nature and the marketplace is woefully inadequate to explain most events in today’s global marketplace.

Unfortunately, however, we are confronted with examples of leaders guided by such principles, ones that ultimately don’t serve the common good.

In an analysis of our psychology, the author distinguishes the workings of the fast brain, governed by impulses and the slow brain, characterised by reflection, willpower and morals. Five major personality traits are examined: openness, conscientiousness, extroversion, agreeableness and risk-aversion/fear. While these traits are prewired at birth at a set point along each axis, our life experiences can move the settings.

Personality in and of itself does not determine our character and it isn’t necessarily an important factor in successful leadership, provided that the leader in question operates from a strong foundation of moral principles and character habits.

For example, a leader who is excruciatingly shy may have trouble communicating vision, passion and strategic focus in a large organisational meeting. That person’s extroversion may shift to the right over time as they become more comfortable with their position and decisions.

However, in the meantime, the leader’s strong principles and character-driven leadership style are likely to win the confidence and support of the workforce, even if its members don’t respond to the leader’s personality.

On the other hand, an extroverted leader who has a relatively casual attitude regarding character habits and principles may actually find that their open affable personality actually gets in the way of their effective leadership.

Kiel focuses on the importance of personal narratives, the story you tell yourself and others that allows you to make sense of your life experiences. The two key questions here are “who am I?” and “how did I become the person I am?”

In the case of the chief executives interviewed for the research in this book, all those later identified as virtuoso leaders were able to recognise the threads that they had woven to create their life stories and how their principles and beliefs were reflected in their actions and decisions.

Interestingly, they also acknowledged that painful experiences occasionally tempted them to respond with fear and anger but such responses were rare exceptions, not a “go to” position in tough situations.

You may be the only person in your life that is unaware of your own character shortcomings, Kiel notes, and the work involved in exploring your own nature and ways to overcome problems can be difficult and painful but is ultimately worth it.

An accompanying website, returnoncharacter.com, includes a 15-minute self-assessment tool to evaluate where you are on a high to low character scale.