Infrastructure a priority over tax cuts for ‘Brexit refugees’ 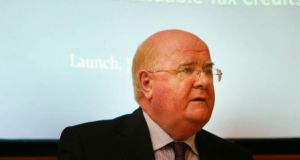 A Government € 1 billion spend on infrastructure would be a better use of resources than giving tax cuts to attract “Brexit refugees” from the City of London, according to the director of Social Justice Ireland.

Referring to future possible resources available to the Government Dr Healy said “investing € 400 million of the fiscal space to deliver broadband to rural areas will have a much better impact on productivity and competitiveness than tax cuts”.

“It will also demonstrate Government’s commitment to rural Ireland and to ensuring a more balanced spread of job creation,” Ms Murphy said.

Dr Healy said the social housing crisis was a further example of the need to prioritise infrastructure and “we propose that Government allocate € 600 million of the fiscal space to social housing in Budget 2017”.