Think a vaccine will nuke Covid? Check out analysts forecasts for Pfizer up to 2030

Market Watch: Pharma giant is spinning off a host of off-patent drugs, including Viagra 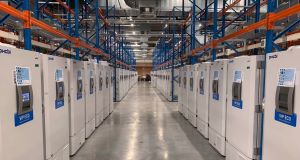 A Pfizer facility for storing its Covid-19 vaccine in Belgium. Photograph: Pfizer/AP

The last Democrat in the Oval Office was no friend of Pfizer. Barack Obama’s move in the twilight days of his administration in 2016 to clamp down on tax-driven corporate mergers torpedoed the US pharma giant’s planned $160 billion tie-up with Dublin-based Botox maker Allergan.

Still, Pfizer, possibly best known for restoring the magic in many a bedroom over the past two decades with its Viagra drug for erectile dysfunction, appears poised to supercharge the first 100 days of Joe Biden, Obama’s former deputy, when he takes power in January.

Pfizer and its German partner BioNTech stunned epidemiologists and equity markets alike on Monday morning by revealing that their Covid-19 vaccine candidate had proved more than 90 per cent effective in late clinical trials.

That was well above the 50 per cent threshold that would have been enough for drug regulators in the global race to stop coronavirus in its tracks.

Other frontrunners – including Massachusetts biotech Moderna; UK-based giant AstraZeneca and the University of Oxford; and the world’s largest healthcare company, Johnson & Johnson – are hoping to follow quickly with positive results for their own vaccines. But Pfizer and BioNTech have the clear edge, for now.

The duo plan to apply for emergency-use authorisation from the US Food and Drug Administration for the vaccine at the end of the month – assuming the initial findings hold up and key safety data, expected next week, looks in order.

They are hoping to produce 50 million doses by the year end, enough to vaccinate 25 million people, with up to 1.3 billion vials to be manufactured in 2021.

The US, EU, UK and Japan have already pre-ordered more than 60 per cent of the planned stocks at up to $19.50 (€16.50) a jab, putting the world’s poorest countries on the back foot. (The logistics of getting the vaccine to people in developing countries are not helped by the fact that the vaccine needs to be stored at a temperature of minus 70 degrees.)

But a successful roll-out early next year in Pfizer’s home country would be a nice tailwind for Biden as he settles into office, even if he warned Americans this week that they still face “a very dark winter” and pleaded with them to wear masks as the US hits record Covid-19 cases on almost a daily basis.

Covid-19 has so far officially infected almost 53 million and claimed the lives of nearly 1.3 million globally, according to data from Johns Hopkins University in the US.

The vaccine breakthrough has prompted analysts at investment banks and stockbroking firms into action. Morgan Stanley’s number crunchers have allowed for no margin for error as they moved the vaccine’s probability of success this week from 65 per cent to 100 per cent.

Mizuho Securities’ analyst Vamil Divan has set a share price target of $44 for Pfizer’s stock – which points to about 17 per cent upside from current levels. While Pfizer shares spiked as much as 15 per cent on Monday, they have since fallen back and remain down 4 per cent for the year to date.

“Challenges remain on the manufacturing and distribution side of things in order to be able to get the vaccine to high-risk patients and, ultimately, to the general population,” Divan said in a note to his firms’ clients.

“It will also take some time and extensive education in order for enough people to gain sufficient confidence in the vaccine’s profile to be willing to receive it.”

There is, of course, a lot more going on at Pfizer, a group that generated almost $52 billon of sales last year, than a coronavirus vaccine.

It is spinning off a host of off-patent drugs, including Viagra and the once top-selling cholesterol treatment Lipitor, into a joint venture with generic pharma company Mylan.

Pfizer shareholders will receive direct shares in the new entity, Viatris, after the deal completes on Monday.

The hope is that by shedding low-growth assets, Pfizer’s shares will attract a premium for its remaining drugs, including its blockbuster pneumonia vaccine and breast cancer treatment – and the prospect of some of its 89 pipeline projects delivering the goods. The spin-off also increases the risk profile of the remaining group.

Investors found out this week the level at which Pfizer chief executive, Albert Bourla, thinks it’s time to take money off the table. He raised $5.6 million on the day of the vaccine revelation by flogging about 60 per cent of his personal shares at $41.94 each.

The company was quick to clarify that the sale was part of his “personal financial planning” and had been authorised in August. It was all under a pre-determined plan that allows corporate insiders to sell stock within a set timeframe and price range, in order to avoid allegations of using non-public information for personal gain.

A purer play for investors on the Covid-19 vaccine has been BioNTech, a company founded in 2008 by Turkish-German scientists and married couple Ugur Sahin and Ozlem Tureci with an Austrian oncologist.

The business had an unpromising Nasdaq initial public offering last year when the company sold a lower-than-planned amount of shares at a weaker-than-expected price.

Thirteen months on, however, the shares are trading almost 600 per cent higher, at about $102 – valuing the group at $24.5 billion.

We don’t, as yet, know anything about the long-term effectiveness of Pfizer and BioNTech’s vaccine.

But those who still think that a widespread inoculation drive will wipe out Covid-19 in the next year or so – preventing it from turning endemic – should look at some of the estimates being bandied about by analysts this week.

Morgan Stanley sees Pfizer and BioNTech continuing to rake in more than $8 billion in annual sales 10 years from now from BNT162b2, as the vaccine is known. Though hopefully by then they’ll have at least come up with a snappier name for it.