Dublin and California-headquartered biotech recently closed a $105m funding round 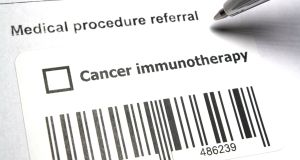 ALX Oncology, a Dublin and California-headquartered biotechnology company in which the State has a stake, has filed for a $100 million (€89 million)initial public offering (IPO) on the Nasdaq.

The move comes just over four months after the clinical-stage immuno-oncology company raised $105 million in a Series C funding round in what was the largest single Irish deal recorded since 2018.

ALX said it plans to list on the Nasdaq under the symbol “ALXO”.

Its lead candidate, ALX148, which works on the basis of blocking cancer cells spreading via a protein called CD47, is currently in a Phase 1b trial.

AXL booked revenues of $4 million for the 12 months to the end of March.

The Ireland Strategic Investment Fund (ISIF) has a minority interest in the company through its partnership with Lightstone Ventures.

1 Why are markets booming when a crash is on the way?
2 How much do Irish people earn? And what will Covid-19 do to our wages?
3 Ryanair Irish cabin crew to vote on pay cuts
4 Drumcondra credit union collapses as merger plan fails
5 Government’s budget deficit balloons to €5.3bn on back of Covid spending
6 Permission sought for €150m film and media campus in Wicklow
7 Dunnes Stores trials online ordering from Cornelscourt outlet
8 Could your old car be giving away all your secrets to its new owner?
9 Government committed to finalising roadmap for safe overseas travel ‘shortly’
10 No free lunch on coronavirus cash payments
Real news has value SUBSCRIBE