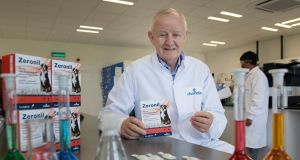 Chanelle Pharma founder and managing director Michael Burke: “I think Covid is going to affect every business. There is going to be no business unaffected apart from, maybe, human pharma.”

Generics is a fast-paced business. Stand still and you will very quickly get left behind. Michael Burke knows this only too well.

So when Covid-19 struck, he wasted no time locking in supplies to keep his business up and running.

“We have tried to buy forward a year’s supply of everything,” says Burke. Normally, his multimillion-euro business has a finely-tuned supply chain delivering raw materials as needed “but, at the moment, from India and China, either because there are huge backlogs in getting containers or getting products on a plane, it’s a nightmare”.

“That’s why we are trying to buy forward as much as possible. It obviously costs a lot of money but we want to ensure we have continuity.”

Burke runs Chanelle, the veterinary and human generics medicine manufacturing business he founded in the Co Galway town of Loughrea over 35 years ago. From his regional base, he runs the biggest animal pharma businesses in Europe.

Back in 2016, he announced plans for a €10 million purpose-built plant in the town to manufacture a range of Spot On worm, flea and tick treatments for cats and dogs in the key US market. It was completed in 2018 but only cleared by the US Food and Drug Administration – a necessary step to export to the US – in March.

On April 30th – the last day of Chanelle’s financial year – the first batch was shipped out to the US.

For Burke, it is a huge opportunity, battling for a stake of a $1.3 billion to $1.5 billion market for insecticidal products for cats and dogs. It’s a lucrative business but intensely competitive.

It’s not Chanelle’s first venture to the US. Last time around, he was undone by the takeover of his US-based joint venture partner. But that was an altogether more modest exercise. Burke has invested heavily this time – both financially and in terms of planning over a number of years – and he is taking no such chances. Chanelle Pharma has secured a contract with Verbic, one of the largest distributors of veterinary products in the US, to ship more than two million batches of Spot On over the next few months.

It has also secured a new contract to supply additional veterinary products to the US by the year end. Back home, Chanelle has applied for FDA sanction for the manufacture of a second Spot On product for the US market.

Now in his early 70s, Burke is in no hurry to slow down. Having barely started shipping Spot On from the new US-approved facility in Loughrea, he is already ploughing a further €16 million to €18 million into another new factory on the site focused on selling liquids and tablets purely into the US market – part of an ongoing €85 million investment programme at the Galway site.

And his team is also working on new technology in-house that he acknowledges will take a couple of years to perfect. “We don’t know anyone in Europe that is doing this particular technology and it is going to be the way of the future,” he says, not about to divulge too many details to competitors through The Irish Times.

Covid has not thrown him off his stride but he admits it has created problems, and not just in securing raw materials.

Ireland has fared better, he says, with the local small-animal sector relatively unscathed.

The breadth of Chanelle’s business has also helped. Covid might have sent pet owners indoors but farmers still have their work to do and Burke says the company’s large-animal business has not really been affected.

“Germany just announced they had their best year ever in veterinary pharmaceuticals. Anywhere there are a lot of cattle and sheep – not so much pigs at the moment because of the swine fever – but particularly cattle and sheep is doing very well.

“And even Ireland is doing very well and prices of cattle and sheep have gone up recently.”

Up to the end of April, Chanelle’s operations were running on a 24/7 basis. “Since the first of May, we are 24/5, with a few of the lines working 24/7. We have only been affected by one API [raw pharmaceutical ingredient] that was delayed and that is coming in in two weeks’ time.”

Burke says he has been lucky, with no incidence of coronavirus occurring on site. The company has had 150 of its 535 staff working from home as a precaution but he hopes to have them back on site over the next two months.

“We have not allowed anyone [outsiders] on site,” he says. “Even I have not got into production since last March. Because the people in production don’t want new people coming in and you have to respect that. We try to do the best we can under the circumstances.”

As a pharmaceutical business, Chanelle is well attuned to having to jump to regulatory guidelines so the workplace restrictions around Covid have been taken in their stride. He’s confident that complying with social-distancing rules – even at two metres – will present no difficult and insists the business has good procedures in place.

Amid all the tumult, Chanelle delivered its strongest results to date. “It is ironic,” Burke says. “We had our two best months ever in the history of the company in March and April”.

For the year as a whole, the company delivered sales growth of 11 per cent to €135 million and “a substantial increase in profit as well”.

But Burke expects that it will be some time yet before Covid runs its course.

“We expect the back half of the year to be not so good in the small-animal sector because I think the chances are there will be another [Covid] peak between the end of September and December and, if that happens, it will have an effect on the small animal.

“It is very hard to say what’s going to happen. If you look at the multinationals, they are all decreasing their turnover by between 10 per cent and 20 per cent in their veterinary business.”

Chanelle is the biggest player in generic veterinary pharmaceuticals in Europe with just short of 3,000 animal medicines. On top of that, it has licences for about 1,800 human drugs.

Europe accounts for between 70 and 75 per cent of business but it also has a strong presence, Burke says, in Japan, Australia and South Africa as well as markets in Asia and the Middle East where it has a R&D facility in Jordan.

“We would be seen as the number-one developer in veterinary pharmaceuticals in Europe. Most companies would develop one product a year; we had 14 or 15 last year and we’ll have maybe 17 new products this year,” he says.

“In our five-year strategic plan, we had 64 veterinary products and about 34 human products in the pipeline.”

And what keeps him going after so many years? He describes work as his hobby and says a happy home life has been a key to his success. “What drives me most is research and development,” he says. It accounts for around €10 million of spend a year.

“I just love that part of the business. It is exciting. You get a lot of disappointments but you are always going to get disappointments in R&D because not everything is going to work. You have to take that on the chin and we do, but it is an exciting business when you are developing your own products.”

He says he is considering a succession plan but he gives no impression of being ready to take a backward step.

“The Spot On business is a major opportunity for us and it gives us an entrée into other companies that otherwise we would not have got,” he says. The US challenge excites him, not least the opportunity for Spot On to give Chanelle a foot in the door of potential buyers of some of its other products.

“Trying to get into big companies, the first product you get in is the hardest. After that it gets easier.”

He is bullish about the future of the business, anticipating strong growth over the next three years.

“This year might be a bit of a hiccup because we have to wait and understand what is going to happen over the back end of the year because nobody knows. I think Covid is going to affect every business. There is going to be no business unaffected apart from, maybe, human pharma.

“We’re lucky. We have a nice business, brilliant people in the company and that’s what makes the business for us.”