Sanofi planning to cut up to 1,680 jobs in Europe 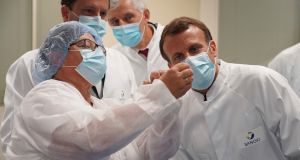 Sanofi said on Friday it is planning to slash up to 1,680 jobs in Europe, confirming what two sources familiar with the matter had previously told Reuters.

Sanofi has a manufacturing campus in Waterford with more than 740 skilled people working across multiple products and platforms, supplying therapies to people in over 70 countries.

There is no indication yet where the job cuts will be, although the company has been contacted for comment in relation to its Irish operation.

One source said the cuts would be carried out over three years. The sources declined to be identified because the plan had not been announced officially.

Reuters reported on Thursday that Sanofi was considering cutting hundreds of jobs and would discuss potential steps with staff representatives on Friday and June 29th.

A source said Sanofi would be focusing on efficiency gains through increased digitalisation and IT outsourcing.

The plans are part of a broader strategy outlined in December by the group’s chief executive Paul Hudson, who joined Sanofi in September last year.