Reilly to restrict tenders from firms linked to tobacco group 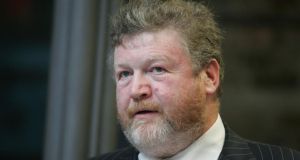 James Reilly: the Minister for Children expressed disquiet that solicitors Arthur Cox are simultaneously working as corporate legal adviser to Tusla Corporate (in a contract worth €800,000) while acting for Japan Tobacco. Photograph: Sasko Lazarov/Photocall Ireland

Minister for Children James Reilly is taking steps to prevent any firm which has a contract with a tobacco group from tendering to work for bodies under his remit, among them the child and family agency Tusla.

The development comes on foot of the Minister’s disquiet that solicitors Arthur Cox are simultaneously working as corporate legal adviser to Tusla while acting for Japan Tobacco in threatened legal action against the State over plain cigarette packaging.

The corporate element of Arthur Cox’s work for Tusla is worth €800,000 per annum including VAT, and the company manages some €12 million in annual legal expenditure for Tusla through a network of 31 local solicitors.

Arthur Cox carries out similar work for the Health Service Executive, another of many public clients.

The chief civil servant in Dr Reilly’s department, Fergal Lynch, said in correspondence to the Minister on Wednesday that the it would be “extremely problematic” for Tusla to withdraw from its arrangements with Arthur Cox before its contract expires next February.

However, Mr Lynch said the Minister might wish to consider asking all agencies in his remit “to insider a requirement in all future procurements” that firms tendering for services must sign a declaration confirming they have no contractual arrangements with tobacco companies.

“This would send an important message about the principle of non-involvement with the tobacco industry. If you wish I will immediately seek legal advice about the scope for including such a requirement in all future tendering processes, to ascertain if it is legally feasible.”

On Dr Reilly’s instruction this option is now under examination within his department.

It remains unclear, however, whether the introduction of such requirements are permissible within the framework of the law on tendering and competition.

Dr Reilly had instructed Mr Lynch to examine whether Arthur Cox and solicitors McCann FitzGerald, which works for Imperial Tobacco in similar threatened action against plain cigarette packs, had any contractual relationships with his department.

There was no such relationship with either firm – and Arthur Cox’s contract with Tusla is the only arrangement that either company has with any of the agencies under the department’s aegis.

“While it might be argued that there is no direct conflict of interest in these arrangements from a purely legal perspective, you have made very clear your view that it is of concern from a policy perspective for an agency such as Tusla to be advised or represented by a legal firm that also represents international tobacco companies,” Mr Lynch said.

Separately, the Ireland Strategic Investment Fund said it held investments in international tobacco companies which were worth some €10 million at the end of 2014. These investments were previously held by the National Pension Reserve Fund. Only assets covered by the Cluster Munitions and Anti-Personnel Mines Act of 2008 are barred from the fund.

1 How much state pension will I get next year?
2 Oxford Covid vaccine trials offer hope for elderly
3 Tesco takes to the skies with home delivery by drone
4 Ulster Bank to introduce new card payment controls on app
5 How long can Government afford to keep State pension age at 66?
6 Covid-19 will worsen shortage of accountants, says CPA Ireland
7 State has won more than 80 Brexit-related FDI projects
8 RTÉ to seek 70 voluntary redundancies as ‘large costs’ beckon in 2021
9 Apple planning updates to its AirPods earbuds next year
10 Retailers accused of ‘stealing business’ from rivals by flouting restrictions
Real news has value SUBSCRIBE