Company to create up to 50 jobs at Dungloe facility, with capacity for 30,000 tests daily 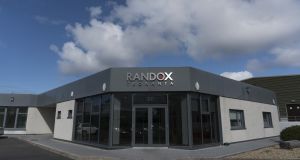 Northern Irish medical diagnostics company Randox is building a new Covid testing laboratory at its Co Donegal facility, with capacity for up to 30,000 tests a day.

The company, which is playing a key role in the UK government’s Covid testing programme, said it expected to create up to 50 new roles as part of the move.

Company founder Dr Peter FitzGerald said he expects testing will commence at the Dungloe site in January. Randox Teoranta, which currently employs 110 people, was established with the support of Údarás na Gaeltachta in 2008. It is responsible for about 14 per cent of the group’s manufacturing and R&D work.

The news comes as Randox confirmed it has now completed six million tests since the coronavirus pandemic began. The company, which is investing about £68 million (€75.5 million) in Covid testing, has increased capacity at its Co Antrim-headquarters from just 150 tests a day in mid-March to more than 80,000 a day currently.

With testing to commence in Donegal shortly, the company is looking at being able to carry out over 100,000 tests each day across the group.

Randox, which was founded in 1982, has also increased headcount significantly in response to the pandemic with 750 new staff this year, taking total employees to over 2,000.

“A lot of the technology we’ve developed in Donegal is fundamental to our work, with many key components manufactured there. It is useful to have additional facilities open for a number of reasons, including biohazard protection and supply chain resilience,” Dr FitzGerald said.

Randox, which opened an express Covid-19 testing service at Dublin Airport two weeks ago for travellers looking to fly abroad, has been awarded contracts worth nearly half a billion pounds by the British government since the coronavirus pandemic began.

Its move into Covid testing has led to greater scrutiny of the company, however, with claims that the contracts won were due in part to the close links of company consultant (and former Northern Ireland secretary) Owen Paterson and the ruling Conservative party.

Its testing regime has also been questioned, with a recent undercover investigation by the Channel 4 Dispatches programme suggesting “serious failings”. Randox has strongly rejected all the claims made against it.

Separately, Boots has become the first pharmacy group to offer Covid testing services in its stores.

The service, which provides test results within 24 hours, will initially be available in seven stores in Dawson Street, Dublin and at outlets in Cork city, Letterkenny, Knocknacarra, Naas, Tullamore and Ashbourne. The PRC test costs €139 and is intended for customers that are not displaying Covid-19 symptoms.