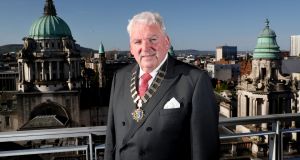 Businesses North and South are “hedging” when it comes to investment decisions because of the uncertainty surrounding Brexit which is putting “jobs, economic growth and prosperity” at risk, according to the new president of Chartered Accountants Ireland.

Feargal McCormack, elected president at its 130th annual general meeting, said businesses across the island are cautious about the future because of the lack of clarity surrounding the Brexit negotiations.

Mr McCormack’s warnings come as one chief executive of a leading agrifoods company in the North has indicated that his organisation is “sitting” on a potential £25 million investment project that was originally earmarked for Northern Ireland.

Mr McCormack is the managing director of PKF-FPM, a chartered accountancy and business consultancy practice which is headquartered in Newry but has offices in Belfast, Dungannon, Dundalk, Mallusk and Balbriggan.

He said that, aside from Brexit, the North’s current unstable political environment is also contributing to the overall climate of uncertainty for businesses, and while huge progress had been in the last 20 years since the Good Friday Agreement, politicians needed to “grasp” the current opportunity to find common ground and “get on with it”.

“We must recognise that the one factor which will make the biggest contribution to the international competitiveness in Northern Ireland and on the island of Ireland is political stability. Stability should naturally incorporate an agreement on any Brexit arrangements going forward, given the evolution of the island economy and the land border between Northern Ireland and the Republic of Ireland.”

Chartered Accountants Ireland has operated as an all-island professional body since its foundation 130 years ago by Royal Charter in Dublin on 14th May 1888.

Mr McCormack believes that members of the organisation have an “obligation” to use their knowledge to help others and speak out on behalf of the communities that they belong to.

“There’s a great diversity in the Chartered Accountants of Ireland and we’ve a lot of influence and I believe that we can use that for the greater good,” he said.

At the organisation’s latest agm, Conall O’Halloran, who is a partner and head of audit practice with KPMG in Dublin, was also elected deputy president of Chartered Accountants Ireland while Paul Henry, director at Osborne King in Belfast, was elected vice-president.