Uniphar sounds out investors for €150m IPO amid market rally 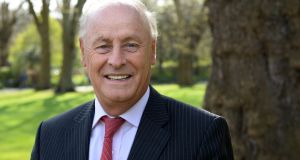 Uniphar, the pharmaceuticals wholesaler and retailer chaired by Maurice Pratt, has begun sounding out potential investors for an initial public offering (IPO) that could raise €150 million and take advantage of a rally so far this year by equity markets globally.

The company, which has spent more than €150 million on seven deals since 2012, has hired stockbroking firm Davy and Royal Bank of Canada to manage a share sale and flotation, according to sources. A transaction could take place before the end of July, though this depends on market conditions remaining favourable, they said.

“It is a stated objective of Uniphar plc to seek a potential IPO listing on the Dublin and London markets subject to favourable market conditions,” a spokesman for the company said. “The company is continuing to monitor the markets with this objective in mind.”

He declined to comment further. Mr Pratt told the company’s 500-plus shareholders, mainly independent community pharmacists, last December that its earnings before interest, tax, depreciation and amortisation (ebitda) doubled to €40 million in 2018 in what was a “transformative” year for the Irish company.

In the second half of last year, Uniphar completed the purchase of the healthcare distribution unit of construction-to-property investment company Sisk Group in a deal involving cash payments of up to €65 million over a two-year period and the transfer of a 15 per cent stake in the business.

An IPO of Uniphar would raise funds for further deals, give it a tradable stock currency for takeovers, allow it to deleverage and ultimately give existing shareholders tradable securities – though they would likely be locked up for a period after a flotation. It would also capitalise on 18 per cent rally by the Iseq index in Dublin and a 15 per cent rebound by the wider European market so far this year, after a stock market slump in the second half of 2018 scuppered a series of IPO plans by companies in Ireland and overseas.

Formed in 1994 through the merger of United Pharmacists Co-op and Allied Pharmaceutical Distributors, Uniphar invested heavily in retail before the financial crisis. It was forced to take a €98 million writedown on its investment in scores of pharmacies in 2008.

Mr Pratt, the former head of Tesco in Ireland and drinks maker C&C Group, came on board as group chairman a decade ago, with Ger Rabbette being hired as chief executive the following year.

An IPO would complete a significant turnaround since 2010, when a series of cuts by the Health Service Executive (HSE) to the prices it was prepared to pay for medicines hit the company and led to large-scale restructuring.

In 2013, it acquired Cahill May Roberts in Ireland, which gave it the scale to compete and absorb the HSE-imposed cuts.

The following year Uniphar started to diversify into higher-margin commercial services with two new divisions: commercial and clinical, which includes nurse-led homecare, and managing certain activities for pharma manufacturers on an outsourced basis; and life-cycle management that includes helping manufacturers manage the life cycle of niche products when they are off patent.

The company also began moving outside Ireland, expanding into Britain in 2015 and into the Benelux region in February of last year.

1 Who are Ireland’s 17 billionaires?
2 My father in a nursing home wants to gift me his house
3 State subsidises public sector retirees to cover gap until State pension
4 Are there annual limits on inheritances or gifts to a child?
5 Q&A: Why has the pension age question suddenly become an election issue?
6 Property firm sues engineering company over waterproofing of basement
7 O’Flynn says subsidiary ‘mistakenly’ sought permission for student apartments in Birmingham
8 Insolvency arrangement approved for man with €60 million in debts
9 Should I sell the old family home to allow children buy apartments?
10 Corporate tax change is inevitable, says Donohoe
Real news has value SUBSCRIBE