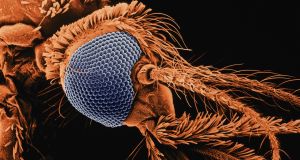 A trial by Dublin-listed pharmaceutical services company Open Orphan has ascertained that a vaccine it is developing for mosquito-borne diseases such as zika and malaria is “safe and induces a strong immune response in healthy volunteers”.

Open Orphan, a European-focused, rare and orphan drug consulting services platform, informed the Irish stock market of the results of the randomised, placebo-controlled, double-blind phase one trial on Monday.

The results have been published in the Lancet where scientists described them as “encouraging and worthy of further study”.

The vaccine has been developed by Imutex, in which Open Orphan owns a 49 per cent stake in conjunction with the SEEK Group.

Numerous studies have shown that protection from diseases carried in saliva is possible if you alter the immune response to saliva. However, using natural saliva to achieve this is not viable.

The vaccine is designed as a transformational vaccine, the first ever mosquito synthetic saliva vaccine designed to protect against mosquito-borne diseases carried in the saliva such as zika, malaria, and dengue fever.

It is designed to provoke an immune response against mosquito saliva, rather than any specific parasites, viruses, or bacteria the mosquito might transmit making it an important tool in the fight against mosquito-borne diseases.

The double-blind study, which began in 2017 at the NIH Clinical Center in Bethesda, Maryland, was the first trial of this so-called “mosquito saliva vaccine” in humans.

The study’s results are promising and suggest that further research to test the vaccine’s efficacy against individual pathogens, followed by larger field studies, would be worthwhile.

A widely available vaccine could provide protection against emerging and re-emerging mosquito-borne diseases as they arise, allowing public health officials to quickly respond to new outbreaks and epidemics without waiting for new treatments or vaccines.