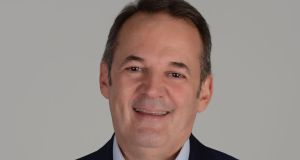 Chis Nowers, who has been appointed chief executive of ONK Therapeutics.

Serial life sciences entrepreneur Seamus Mulligan has invested in Galway company ONK Therapeutics for the second time this year alongside American biotech investor Acorn Bioventures and other shareholders in an $8 million (about €6.8 million) fundraising.

ONK, which is developing enhanced natural killer cells in the immune system to target cancers, has now raised $14.6 million over the past six months. In May, Mr Mulligan led an investment that saw his cell engineering business, Avectas, take a 20 per cent stake in ONK.

ONK, an NUI Galway spinout founded by Prof Michael O’Dwyer in 2015, has also appointed industry veteran Chris Nowers as chief executive. Mr Nowers is a cell therapy expert who has worked in management roles with both Amgen and Bristol Myers Squibb over a 25-year career.

Prof O’Dwyer will continue in his role as chief scientific officer of the group. The latest funding will allow the company expand its team and its preclinical R&D and manufacturing capabilities.

ONK has developed a process that genetically engineers natural killer (NK) cells – which are part of the body’s immune system – to allow them to better pursue cancer cells that have made themselves invisible to normal NK cells.

It licensed one of its prospective therapies – targeting blood cell cancers such as non-Hodgkin’s lymphoma and certain forms of leukaemia – to Avectas, whose Solupure process allows the gene editing to be done rapidly and safely, without upsetting the cells and in a way that also keeps the costs of the process down.

Unlike personalised medicine, where a patient’s own cells are engineered and reintroduced to the body to fight disease, ONK and Avectas are looking to engineer cells that can be used in many different patients suffering from these cancers.

“This exciting off-the-shelf platform has the potential to produce a next generation of cell therapies, which could improve performance and overcome some of the shortcomings seen with earlier approaches,” Mr Nowers said.

Acorn Bioventures partner Isaac Manke, who will join the board of ONK, said it was “a highly innovative next-generation NK cell therapy company with an exciting portfolio of research stage assets”. He said the new funding should help bring the company’s pipeline drugs towards clinical trial stage.

This is understood to be Acorn’s first investment in an Irish business. The group, founded in 2017, specialises in investing in small-capitalisation public and private biotechnology companies.