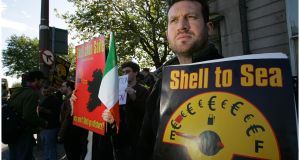 Protests and opposition delayed production at the Corrib gas field by more than a decade. Photograph: Bryan O’Brien

No doubt, Shell is glad to see the back of the Corrib natural gas field, even if it is on track to lose about €1 billion on 15 years of heavy investment in the controversial project.

The sale of its 45 per cent interest in the gas field off the Mayo coast to the Canada Pension Plan Investment Board (CPPIB) for €830 million is part of a $30 billion (€26.3 billion) asset sale programme by the Anglo-Dutch group as it seeks to cut its $90 billion debt pile following its takeover of smaller UK rival BG Group early last year.

Shell may receive up to €250 million in additional payments from CPPIB over the next eight years, but that’s subject to future gas prices and field production rates.

Shell’s disillusionment with the Corrib investment, where protests and opposition delayed production by more than a decade before gas started flowing at the end of 2015, is probably part of the reason why it and its partners handed a petroleum exploration licence for the Rockall Basin off the Donegal coast back to the State in 2014. (That, and slumping fuel prices at the time.)

It may also partly explain why Shell was not among a slew of major oil groups to bid for options to search for oil and gas off Ireland’s west coast in two rounds of allocations by the State in the past 18 months.

ExxonMobil, Statoil (a fellow, much more low-profile, investor in Corrib, with a 36.5 per cent stake), BP, Eni and China National Offshore Oil Corporation all successfully bid for options in what the Government said was a record level of applications. They’re hopeful that massive finds off the eastern coast of Canada in recent years can be mirrored on this side of the Atlantic.

Indeed, the CPPIB’s head of natural resources, Avik Dey, told The Irish Times yesterday he is well aware of the level of interest in this particular region, the so-called Porcupine Basin. He indicated the fund may seek to increase its interests off the west coast in time – saying the Canadians would “evaluate other opportunities” in the region that may present themselves.

Shell may have other views.