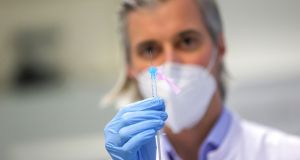 A doctor holds a syringe of Moderna vaccine against Covid-19 immediately before a vaccination at the University Hospital in Essen, Germany on January 18th. Photograph: EPA/FRIEDEMANN VOGEL

Moderna is co-operating with California’s investigation into several cases of possible allergic reactions among people who received its Covid-19 vaccine, the company said Tuesday.

California State Epidemiologist Erica Pan recommended providers withhold shots from one batch of Moderna’s vaccine “out of an extreme abundance of caution”. The recommendation came after the state received reports of several people experiencing serious allergic reactions following immunisation from the same batch, a higher-than-usual number, Pan said in a statement.

About 1 in 100,000 people have had a severe allergic reaction to Pfizer and BioNTech’s vaccine, which uses similar technology as Moderna’s shot, the US Centers for Disease Control and Prevention said earlier this month.

That rate means the phenomenon is rare, though regulators are closely tracking the safety of Covid-19 vaccines.

A county health department spokeswoman said the lot the state is referring to matches the one used at Petco Park when the possible reactions were observed. The county stopped using doses from the same batch at other clinics, resulting in about 30,000 doses being pulled from the county’s supply, she said in an email Tuesday.

Moderna in a statement said about 1.3 million doses were produced in the batch in question. Of those, 964,900 doses already have been distributed to about 1,700 vaccination sites in 37 states, Moderna said. The batch was shipped between January 4th and January 8th, and the company expects most of the doses already have been used.

“This investigation is still ongoing and Moderna is working closely” with the US Food and Drug Administration and CDC “to understand the clinical cases and whether the broad pause in use of the lot is warranted,” the company said in a statement.

The CDC and FDA currently do not recommend health departments stop administering this or any lots of Moderna’s Covid-19 vaccine, FDA spokeswoman Abby Capobianco said in an email. The FDA is working with the CDC, the California Department of Health and Moderna to investigate the potential adverse events reported at the vaccination clinic, she said.

CDC did not immediately respond to requests for comment.

The California Department of Public Health in its statement Sunday said more than 330,000 doses from the batch have been distributed to 287 providers in California. The state said it has not been notified of another cluster or similar reports of allergic reactions related to this batch.