Allergan fitted the bill for AbbVie 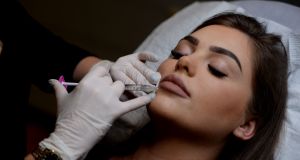 Lip service: AbbVie has been desperate to fill in the gap for its blockbuster arthritis drug Humira, which loses patent protection in 2023. Allergan, best known as the maker of Botox, fits the bill. Photograph: Alan Betson

Botox can fill even the most obstinate wrinkles but the botulinum toxin contained in injections can cause unexpected sagging too. On Tuesday, pharma giant AbbVie announced it was acquiring Allergan, best known as the maker of Botox, at an enterprise value of $85 billion (€74.6 billion). AbbVie has been desperate to fill in the gap for its blockbuster arthritis drug Humira, which loses patent protection in 2023. Allergan fits the bill.

Unfortunately, AbbVie’s shareholders are not impressed by the 45 per cent premium it is paying – in spite of an aggressive synergy target. AbbVie’s shares fell 15 per cent on Tuesday morning.

Big Pharma is plagued by social pressure on drug prices and fading drug portfolios. Both create pressure for blockbuster dealmaking. The conundrum is that shareholders hate the risk associated with bet-the-company transactions.

Yet even with a massive premium, Allergan is being acquired at a price just above half its 2015 peak. It was once a Wall Street darling, executing an inversion deal with Actavis and other aggressive acquisitions. As its growth prospects slowed, investors grew restless. Appaloosa Management has been waging an activist campaign. There was a chance the company would split itself in two between aesthetic products such as Botox and the remaining portfolio.

Given its challenges, a premium offer from AbbVie feels like a small miracle for shareholders. Yet AbbVie claims to believe it is getting Allergan cheaply, noting the premium is modest relative to comparable deals. Moreover, it has a plan to achieve a staggering $2 billion in annual efficiencies by whacking at combined R&D and overhead costs. The $2 billion figure represents around 40 per cent of Allergan’s annual spend in those areas. AbbVie says it can boost its earnings per share by a fifth.

Pharma investors have grown to ignore such earnings accretion calculations. Earlier this year, Bristol-Myers Squibb acquired fading biotech star Celgene while promising a massive near-term boost in profits per share. That deal was so poorly received several Bristol shareholders organised against it.

AbbVie has learnt that lesson. It has limited the amount of stock it is issuing to Allergan shareholders so that its own investors will not have a vote. But with shares off so sharply, investors are making their views clear anyway. – Copyright The Financial Times Limited 2019