Deal to be funded with debt and cash on balance sheet 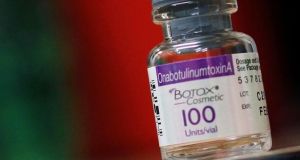 US drugmaker AbbVie has agreed to buy Allergan, the Irish-domiciled maker of Botox, in a $63 billion (€55.3 billion) deal that is the sector’s latest blockbuster transaction driven by the need to replenish drug pipelines. AbbVie employs 600 in the Republic, while Allergan employs 1,700.

AbbVie’s investors gave the deal a resounding thumbs down, sending the Chicago-based company’s shares plummeting 15 per cent to $66.38. Allergan’s stock climbed 27 per cent to $163.94.

AbbVie is betting the acquisition will improve its offering as Humira, the world’s best-selling treatment for inflammatory diseases, is set to face competition from generic versions as the drug goes off patent in the US.

Allergan’s portfolio is best known for Botox, a wildly popular non-surgical cosmetic treatment, but the company also makes drugs that are used in eyecare, gastroenterology and to treat the central nervous system.

The deal will see AbbVie pay $188.24 for each share of Allergan, made up of $120.30 in the form of cash and the rest in stock, the companies said on Tuesday. The offer values Allergan at a 45 per cent premium to its closing price a day earlier. Including about $20 billion of Allergan debt, the enterprise value of the deal is $83 billion.

Bristol-Myers Squibb’s $90 billion takeover of Celgene, struck in the first few days of January, helped unleash a wave of pharma deals this year. It was followed by Pfizer’s $11.4 billion purchase of oncology specialist Array BioPharma and Eli Lilly’s $8 billion buyout of Loxo Oncology.

“With our enhanced growth platform to fuel industry-leading growth, this strategy allows us to diversify AbbVie’s business while sustaining our focus on innovative science and the advancement of our industry-leading pipeline well into the future,” said Richard Gonzalez, chairman and chief executive at AbbVie.

AbbVie and Allergan will have combined sales of more than $48 billion and generate operating cash flow of more than $19 billion, which AbbVie said would be used to pay down the hefty amounts of debt required to fund the transaction.

As part of the deal, two directors at Allergan including its chairman and chief executive, Brent Saunders, will join AbbVie’s board. Mr Saunders, who joined Allergan in 2014, has led the group through a difficult period that has seen a sale to Pfizer collapse and its stock fall more than 60 per cent from its 2015 peak.

More recently, Allergan has faced a challenge from hedge fund Appaloosa that called for the chairman and chief executive roles held by Mr Saunders to be split.

AbbVie plans to fund the transaction with debt and cash on its balance sheet. Morgan Stanley and its Japanese partner MUFG have committed $38 billion to finance the transaction, in one of the biggest bridge loans on record.

The borrowings will saddle AbbVie with debt, and the pharmaceutical group said it would be focused on reducing leverage in the coming years. The companies hope to wring at least $2 billion of costs out of the combined group through job cuts and reductions in their research and development programmes. – Copyright the Financial Times Ltd