Botox approved for treatment of cerebral palsy spasticity in children 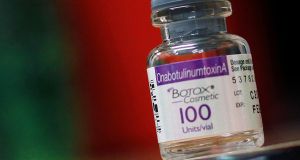 The new market for Botox is a boost for Allergan’s plant in Westport, Co Mayo, which is responsible for the manufacture of worldwide supplies of Botox. Photograph: Shannon Stapleton/Reuters

Botox-maker Allergan has secured regulatory approval to use the drug for the treatment of children suffering from spasticity of their upper limbs.

The new market for the drug is a boost for the company’s plant in Westport, Co Mayo, which is responsible for the manufacture of worldwide supplies of Botox.

And it offers another treatment option for very ill children worldwide, most particularly those suffering from cerebral palsy which is the most common condition among children affecting control of their limbs.

The US drugs regulator, the Food and Drug Administration (FDA), sanctioned the wider use of the drug after a fast-tracked priority review of results from two phase III trials.

Allergan noted that the fast-track procedure was typically granted only to therapies that if approved could offer significant improvements in safety and effectiveness when compared to current standards of care.

The FDA is also looking at an application from the company for the use of Botox for paediatric patients with spasticity in their lower limbs. It is expected to announce a decision on that therapy option in the final quarter of the year.

Figures from the US suggest cerebral palsy affects over 3 per cent of all children. Spasticity is also an issue for people suffering from traumatic brain injury and those with multiple sclerosis, among other conditions.

Overall, 12 million people worldwide are estimated to suffer from some form of spasticity, although the latest Botox approval relates only to children between the ages of two and 17.

Botox, which is derived from the deadly botulinum toxin, was originally used in medicine for the treatment of squints or crossed eyes. However, it is better known in recent times for its use in the beauty industry as a wrinkle smoother.

The fast-track approval came after the company submitted two studies. One was a one-year open label extension study where all participants receive the drug and both patients and doctors were aware of it. The other research was conducted as a 12-week double-blind study where the efficacy and safety of the drug are measured against a placebo with neither doctor nor the patient aware whether they were receiving the drug or the placebo.

Altogether, 235 patients enrolled in the trials, all of whom either have cerebral palsy or had suffered a stroke.

The lower limb application is also supported by two trials, this time involving 284 cerebral palsy patients, according to the company.