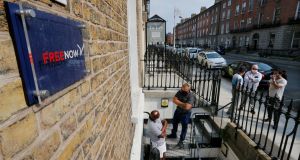 Free Now, the taxi app that has signed up 14,000 Irish drivers, has blamed “technical issues” at a supplier for delays in paying taxi drivers their fares this week. It insists the drivers will be paid “over the weekend” but it is arranging a “contingency plan” in case this does not happen.

Many taxi drivers expressed concern this week after Free Now missed a Wednesday deadline to pass on payments to them for passengers who pay fares through its app, the second week in a row drivers say this has happened.

Drivers say they were told the money due this week would be in their accounts on Friday, but so far the payments have not been made.

In practice, this means that drivers this week have not been paid for any credit or debit card fares through the app, as most passengers now eschew cash in favour of contactless payments.

“Free Now has been made aware of some delays regarding driver payments,” the company said. “The third-party company that manages [driver payments] on our behalf has informed us that the issue, which was due to a technical problem on their side, is being resolved.”

Free Now says its supplier has told it that payments will be processed over the weekend: “We understand that this puts drivers in a difficult situation and so in parallel, we have a contingency plan internally to ensure that drivers are paid as soon as possible, regardless. We appreciate that this is unacceptable and thank drivers for their patience while this is resolved.”

Free Now said its business had “recovered well” following lockdown restrictions that decimated operations for bars and nightclubs, whose patrons filled taxis on weekend nights. With many city offices closed, its corporate accounts are also likely to have seen a decline in daytime business.

It is understood that the payment delays are not considered by the company to be linked to the collapse of German company Wirecard, a service used by Free Now. Free Now is owned by German car marques BMW and Daimler.

Several taxi drivers remained worried about getting paid by Free Now on Friday. Some drivers in contact with The Irish Times said their colleagues may go to Free Now’s Dublin offices looking for payment.

“There’s been delays in payments from Free Now before – a day or two maybe – but nothing like this,” said one driver who didn’t wish to be named.

“Some drivers are waiting on the money coming into their accounts to pay their bills. This could be very serious. Work has fallen off a cliff in the last couple of weeks. It’s down to about 30 per cent of what it was, so it must be down for Free Now. I’m worried.”

1 Son putting elderly dad under pressure to sign over land
2 Family in court dispute over hotels in Dublin and Galway
3 How to gift your child a house deposit . . . tax free
4 BOI customers to be charged twice with bank fees on New Year’s Eve
5 Irish start-up which developed facial recognition for cows raising over $50m
6 Running to go backwards: The problem with productivity apps
7 Irish designer of Oxford vaccine: ‘I’ve never worked so hard in my life’
8 Willie Walsh appointed head of the International Air Transport Association
9 Ten of the most mysterious aircraft disappearances
10 City of London makes late scramble to limit Brexit disruption
Real news has value SUBSCRIBE