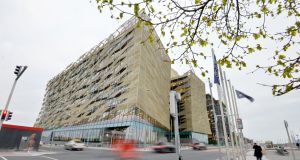 Central Bank of Ireland headquarters on North Wall Quay. The move could give the bank the capacity to grow its employee numbers by some 300, or 17 per cent. Photograph: Alan Betson

The Central Bank has decided to sell its Spencer Dock building in the International Financial Services Centre (IFSC) in Dublin, which it bought for €104 million in 2015, as it intends to buy two buildings being developed beside its nearby headquarters on North Wall Quay to give scope for expansion.

The move could give the bank the capacity to grow its employee numbers by some 300, or 17 per cent.

The two properties are being constructed by developer Sean Mulryan’s Ballymore Group and its Singapore partner Oxley as part of the so-called Dublin Landings mixed development complex in the city’s north docklands.

It is expected that staff will move to the new properties in 2020.

The two buildings have a combined 200,000sq ft (18,850sq m) of floor area, almost 60 per cent greater than the Spencer Dock property, which it had partly leased between 2008 and 2015, when it bought the property outright.

“As the Central Bank’s mandates and responsibilities grow and become more complex, we are committed to ensuring our staff continue to have a fulfilling workplace,” said Gerry Quinn, the organisation’s chief operations officer. “The acquisition of the adjoining premises will ensure that this continues to be the case.”

The Central Bank, which had the equivalent of 1,815 full-time staff as of July, moved its headquarters last year from Dame Street to the north docklands, after buying and completing the construction of a riverside building that was originally being developed to house the now-defunct Anglo Irish Bank. The total cost of that building, where about 1,400 staff and contractors are based, was about €140 million.

More than 400 people work in the Spencer Dock building. The Central Bank said that the sale of this property will partly fund the new building acquisition and the “remaining costs will be funded from the Central Bank’s own resources”.

A spokesman declined to comment on the cost of the two buildings.

Meanwhile, the Central Bank published its latest three-year strategic plan on Friday, which identified Brexit as a priority theme.

“Brexit has also meant a significant expansion in the set of firms looking to use Ireland as a base to serve the EU27 financial system and it is forcing a rethink of the appropriate framework for regulating trade in financial services between the EU27 and other locations,” Central Bank governor Philip Lane said.

The bank’s strategic plan sets out its priorities for the next three years. As well as deepening its Brexit focus, the strategy sets also out an ambition to strengthen resilience and consumer protection.