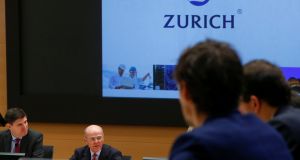 Zurich Insurance Group swung to a profit in the fourth quarter as an overhaul under chief executive Mario Greco gained traction and losses weren’t repeated.

Switzerland’s biggest insurer posted net income of $685 million (€641 million) compared to a loss of $424 million a year earlier on restructuring costs and claims from storms in Ireland and Britain, the Zurich-based company said on Thursday in a statement.

“It was a turbulent year,” Mr Greco said in an interview with Bloomberg Television. “Markets were tough. We made lots of changes but results came out very strong. They give us optimism for ‘17 and the next years.”

Mr Greco is stepping up cost cuts and selling some businesses as ultra-low interest rates chip away at investment income and below-average catastrophe claims keep prices under tap. The company said it eliminated $300 million in annual costs in 2016.

“We remain sceptical about Zurich’s turnaround plans,” Thomas Seidl, an analyst at Bernstein in London, said in a note to clients. “The track record of past cost-cutting exercises is not strong and the people involved have not changed that much.”

General insurance recorded a fourth-quarter operating profit of $611 million, after a loss of $120 million a year ago. The global corporate unit, under restructuring for more than a year, “has not yet achieved a satisfactory level of profitability, and the focus remains on further improvement in the portfolio,” Zurich said.

Mr Greco said he was “cautiously optimistic” about financial markets this year. “We expect markets to support us in 2017 better than they have done in the past year,” he said in the interview. “We expect rates to slow move up.”