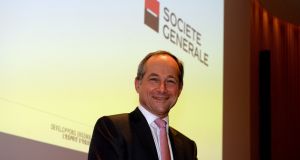 Frederic Oudea, CEO of Société Générale, during the presentation of the group’s 2016 results in Paris. Photograph: AFP Photo/Eric Piermont

Net income was €390 million, down 41 per cent from a year earlier but above the €315 million average estimate of seven analysts surveyed by Bloomberg. Costs, including a charge tied to the sale of a Croatian unit, weighed on the results.

The IPO will give ALD the opportunity “to seize potential growth or potential acquisitions”, deputy CEO Severin Cabannes said in an interview on Bloomberg Television. “Société Générale will remain the controlling shareholder and main funding provider of ALD.”

In the fourth quarter profit at the French retail unit unexpectedly rose 25 per cent to €402 million, helped by cost reductions and lower loan-loss provisions. The result surpassed the average estimate of €290 million in a survey of analysts by Bloomberg News. Société Générale announced at the end of 2015 an intention to cut 20 per cent of its branches by 2020, while luring more clients to Boursorama, its online bank.

The results “reflect good commercial and operational performance in all the businesses and rigour in controlling costs and risks,” chief executive Frederic Oudea said in the statement.

Net income from global banking and investor solutions, which includes trading and investment banking, rose 51 per cent to €432 million as the lender wrote back provisions it had set aside previously.