‘We have investigated them and found them to be completely baseless,’ says company chief 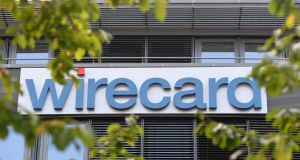 Wirecard has dismissed the allegations made by the Financial Times. Photograph: Getty

German payments company Wirecard has hired KPMG to conduct an independent audit to address allegations by the Financial Times that its finance team had sought to inflate reported sales and profits, it said on Monday.

The company, promoted to the DAX blue-chip index last year, has been the target of several investigative reports by FT reporter Dan McCrum, with the latest, on October 15th, knocking more than 20 per cent off its share price.

It has rejected the newspaper’s allegations, based on internal spreadsheets and correspondence, that Wirecard’s senior finance team had sought to inflate reported sales and profits at its businesses in Dubai and Ireland.

Monday’s announcement drove the company’s shares up by 8 per cent.

“The allegations are old, we have investigated them and found them to be completely baseless,” said chief executive Markus Braun on Monday. “The independent examination by KPMG should lay to rest any remaining speculation and give fresh confidence to the market. We intend to present the results as soon as possible.” – Reuters