US judge issues warrant for arrest of developer 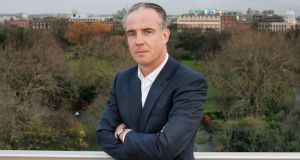 Developer Garrett Kelleher: described issuing of warrant as “surreal” and said an appeal against it was under way. Photograph: Matt Kavanagh

A US district judge has issued a warrant for the arrest of developer Garrett Kelleher and Irish-Canadian lawyer Martin Kenney, over their failure to appear before him in a costs hearing related to a $65 million insurance claim.

Mr Kelleher loaned money to a company that helped fund an insurance claim brought by a Liberian business, Abi Jaoudi & Azar Trading (AJA), against US company Cigna Worldwide (CWW) for damage suffered during the African country’s civil war in 1990.

US district judge Paul Diamond has issued a warrant for the arrest of the Irish developer and Mr Kenney, who previously advised AJA, for contempt of court over their decision not to appear at a costs hearing related to the case in Philadelphia, Pennsylvania, last December.

The alleged contempt is a misdemeanour – a minor offence – which means that neither can be extradited to the US on foot of the judge’s warrant. Both decided against appearing in December as they do not accept the Philadelphia court’s jurisdiction in the case.

Mr Kelleher described the issue of the warrant as “surreal” on Tuesday and confirmed that an appeal against it was already under way. “This is just a misdemeanour and it will be appealed,” he said.

The costs were sought by Chubb Insurance, which inherited CWW’s African liabilities following its merger last year with ACE, which in turn took on those liabilities when it bought CWW’s worldwide casualty and property business in 1999.

AJA won its $65 million judgment in a Liberian court in 2001. However, the company originally sued CWW in 1994 in Philadelphia, home to the insurer’s headquarters. This case failed when the judge over-ruled the jury, which had found in the Liberian business’s favour.

AJA and 22 other Liberian businesses appointed the country’s insurance commissioner as receiver to CWW. He then pursued ACE in the Cayman Islands. Mr Kenney advised the commissioner while Mr Kelleher loaned $2.85 million to a Maltese company which in turn funded part of this litigation.

Mr Kelleher and Mr Kenney do not accept that the US court has any jurisdiction in this, as it involves a Liberian business bidding to enforce a ruling of that country’s court against a Cayman Islands company.

Chubb argues that the Cayman action violated the authority of the US federal courts. This dispute sparked proceedings in Philadelphia last year where the court found in the insurer’s favour. That led to December’s costs hearing.

Mr Kelleher pointed out yesterday that the Liberian judgment against Cigna, ACE and Chubb still stands. “The real story here is the Liberian businesses that have never been paid,” he said.