What the world’s biggest banks say about fleeing Brexit Britain

Some 35,000 jobs could be relocated from UK with many of them coming to Dublin 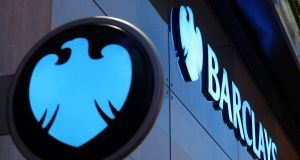 Barclays: The UK bank has settled on Dublin for its main hub inside the EU and is planning to add about 150 staff here. Photograph: Dominic Lipinski/PA Wire

Frankfurt and Dublin are emerging as the biggest winners at London’s expense as banks prepare for Brexit by planning new hubs in the European Union. Standard Chartered and Barclays are set to choose the capital as their EU base for ensuring continued access to the bloc, according to sources with knowledge of their contingency plans.

Banks are fleshing out their plans after British prime minister Theresa May announced in January that the UK would leave the EU’s single market in 2019, likely spelling the end of passporting, where banks seamlessly service the rest of the bloc from their London hubs.

Frankfurt is a natural pick for firms fleeing London given a financial ecosystem featuring Deutsche Bank, the European Central Bank and BaFin, one of the only regulators with experience of overseeing complicated derivatives trading.

As for Ireland, it’s presenting itself as a low-tax, English-speaking location with similar laws and regulations to Britain. All told, TheCityUK lobby group reckons as many as 35,000 jobs could be relocated. Bloomberg News conducted interviews and reviewed public statements to discover what each major bank is now planning.

The Wall Street firm is considering making Frankfurt its main hub inside the EU and could move as many as 1,000 employees, including traders and senior managers, according to a person familiar with the matter. Chief executive Lloyd Blankfein has publicly said the bank has shelved plans to move more key operations to the UK. “We were on track to move more and more of our global activities, so global [operations], global tech – all those things made more and more sense to operate out of the UK,” because of the time zone, Mr Blankfein said in an interview in Davos, Switzerland, in January. “Now, we’re slowing down that decision, and only moving there what we have to move there. We don’t value doing things twice; moving them there and then moving them away from there.”

“We have to accommodate the laws of the land in both Britain and the EU, and that will determine how many jobs and how many people you have to move,” JPMorgan Chase and Co chief executive Jamie Dimon said in Davos earlier this month. “It looks like there will be more job movement than we hoped for.” Before the referendum, Mr Dimon said as many as 4,000 of its 16,000 UK employees could be moved to the Continent after Brexit.

“Yes, we will have to move bankers – we have an SE in Frankfurt, we have an appropriate set-up in Spain,” Andrea Orcel, head of UBS Group AG’s investment bank, said in Davos, referring to the Swiss bank’s German subsidiary, which is licensed to do investment banking. “We still have flexibility to decide where to go, but we will definitely have to move.”

Chief executive Sergio Ermotti has said he may have to move as many as 1,500 of about 5,000 UK investment banking staff. Some of those employees may be relocated to Madrid, Bloomberg reported last week.

HSBC Holdings chief executive Stuart Gulliver said in January that staff generating about 20 per cent of its London investment-banking revenue may move to Paris, where it acquired a French commercial bank more than a decade ago. “Activities specifically covered by EU legislation will move,” he said. Before the June referendum, Mr Gulliver said a Brexit vote would likely result in about 1,000 of the bank’s 5,000 London-based staff relocating to the French capital.

The UK bank has settled on Dublin for its main hub inside the EU and is planning to add about 150 staff here, sources with knowledge of the decision said last week. Barclays chief executive Jes Staley has struck a different tone to other bank bosses. He said in Davos that it would be “very difficult” to dislodge a financial centre like London. If needed, Barclays may reassign its Frankfurt branch to its Irish subsidiary, he said. “Same people, same traders, you have to book a trade in Ireland as opposed to London, but that’s not a wholesale move of our capability from London to Ireland,” he said.

The bank approached Irish officials about making Dublin its legal base inside the EU, sources familiar with the discussions said in December. No final decision has been taken, and the firm is also in talks with Germany’s regulator about choosing Frankfurt.

Citigroup is evaluating locations for parts of its London broker-dealer business, including Ireland, Spain, Italy, Germany, France, and the Netherlands, Jim Cowles, the bank’s top executive for Europe, the Middle East and Africa, said at a conference in Dublin on January 24th. Cowles said he expected the bank would make a final decision the by end of the first half. Bloomberg reported in November that the firm was in discussions with BaFin about moving some of its London-based equity and interest-rate derivatives traders to Frankfurt. Citigroup is also in discussions with the ECB and regulators in EU nations including Ireland about relocating other parts of its operations.

Before the vote, Bloomberg reported that Morgan Stanley would likely move 1,000 of about 6,000 UK employees out of the country in the event of Brexit. Morgan Stanley president Colm Kelleher said the firm would likely move its local headquarters to Dublin or Frankfurt. “If we are outside the EU, and we don’t have what would be a stable and long-term commitment to access the single market, then a lot of the things we do today in London, we’d have to do inside the EU-27,” said Rob Rooney, chief executive of Morgan Stanley International, after the vote. Morgan Stanley executives said New York would likely be the big winner from Brexit as US firms would probably allocate headcount away from Europe altogether.

Daiwa Securities Group chief executive Takashi Hibino said the Japanese brokerage is considering Frankfurt and Dublin among candidate cities to host European operations it moves out of London. The firm, the majority of whose 450 European staff work in London, has yet to establish a licensed entity in the EU, and is running simulations with consultants.

The UK bank plans to convert its Frankfurt branch into a subsidiary, making that its base inside the EU, a person with knowledge of the matter said earlier this month. A small number of people would move from London. The bank has yet to apply for an extension of its German banking licence.

“You’ve got to get your legal entity structure correct so you can operate in two different environments: one inside the UK and one outside,” Bank of America president Brian Moynihan said in Davos. “We already have a lot of that structure set up. Then you have to start think about where locations are, but I think that’s a bit premature.”

Credit Suisse is exploring options for expanding in Dublin after Brexit, two people with knowledge of their plans said last week. Board member Noreen Doyle said at a conference in Dublin on January 24th the bank was in the “early stages” of examining alternatives to London after Brexit.