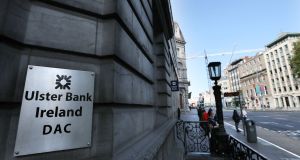 The mulling of a wind-down of Ulster Bank in the Republic comes as Covid-19 has added to the problems of the lender.

Reports that US investment firm Cerberus is considering an approach for Ulster Bank’s €20.5 billion loan book in the Republic have been described as “gravely concerning” by the Financial Services Union.

The Irish Times reported on Friday that the lender’s UK parent is considering the matter as it actively considers exiting the market. A spokeswoman for Ulster Bank’s owner NatWest said, however, that no talks were taking place with Cerberus.

It is understood that Cerberus, among the most aggressive buyers of distressed loans in Ireland and across Europe in the past six years, is assessing the possibility of bidding for Ulster Bank’s entire loan book should NatWest decide to put the business into wind-down.

The mulling of a wind-down of Ulster Bank in the Republic comes as Covid-19 has added to the problems of the lender, which has struggling for years with high costs and low profitability.

Commenting on Friday, Financial Services Union general secretary John O’Connell said he had written to the directors of the board of NatWest to request a meeting.

“NatWest has stated clearly in the last few weeks that it is undertaking a strategic review of Ulster Bank operations in the Republic of Ireland,” he said.

“The FSU has written to the directors of the board of NatWest, the parent company of Ulster Bank, to request a meeting and to ask them to state clearly their commitment to Ulster Bank and to its customers and staff.”

He said NatWest chairman Howard Davies responded to the letter, saying: “In the event of any changes being made to our strategy for Ulster Bank, these would be undertaken with full consideration of impact on all of our stakeholders, including customers, colleagues, shareholder and of course you and your members.”

Mr O’Connell said: “There is a hollow ring about these words now as rumours abound about a possible sell-off of the Ulster Bank loan book to a vulture fund.

He added: “This is not the first time that Ulster Bank has been in talks with Cerberus. In 2018, it agreed to sell a €1.4 billion portfolio of distressed Irish home loans to them.

“Commenting on the 2018 sale, the then Fianna Fáil finance spokesman and now Minister for Public Expenditure and Reform Michael McGrath was widely quoted in describing Ulster Bank as ‘outsourcing its dirty work to a US vulture fund.’

“I call on the board of NatWest to immediately provide clarity on this situation. I also call on the Irish Government to contact NatWest today to seek clarity for staff and customers and to advise them that the day of vulture funds cherry picking Irish banking at the expense of customers, communities and staff are gone.”

1 How long can Government afford to keep State pension age at 66?
2 Developers may need to go back to the drawing board as one-beds fall from favour
3 Covid-19 will have a significantly worse impact on UK public finances than on ours
4 Bake-off soy sauce tweet backfires for UK trade ministry
5 Halfords sees 700% increase in sales of e-scooters
6 Revenue publishes list of companies tapping State for wage support
7 Cosgrave Property Group secures exit from Nama
8 Tighter regulations for car makers will drive buyers to choose electric
9 Bought a desk or a chair? Revenue rules out tax relief for home workers
10 Johnny Ronan loses out on €315m Dublin docklands deal
Real news has value SUBSCRIBE