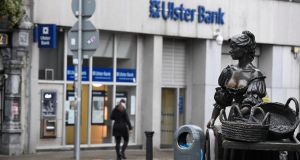 Ulster Bank has a total of €9.67 billion of “unrecognised” crisis-era losses that could theoretically be carried forward indefinitely to reduce tax liabilities.

Ulster Bank in the Republic wrote off almost all of its ability to use financial crisis-era losses to minimise future tax bills last year, before a decision was reached last week to wind down the lender, according to its annual report.

This largely reflects a sharp deterioration in recent years in the bank’s earnings outlook, and offers an insight into forecasts that led to the announcement last Friday by Ulster Bank’s UK parent, NatWest, that it is withdrawing from the Irish market.

At the start of 2019, the Irish lender had €271 million of so-called deferred tax assets (DTAs). These were mainly made up of previous losses that can be used to lower tax bills over the foreseeable future.

However, the level of DTAs had fallen to €10 million at the end of 2020, after €87 million of the assets were written off in 2019, followed by a €174 million charge last year, according to the report.

Ulster Bank has a total of €9.67 billion of “unrecognised” crisis-era losses that could theoretically be carried forward indefinitely, under Irish tax laws, to reduce tax liabilities.

However, such losses can be held as actual assets on the balance sheet only when a company can show that they can be used over a certain period, based on medium-term earnings forecasts.

The bank’s auditors in Ernst & Young (EY) highlighted in the report how they challenged the bank’s projections, before concluding that the calculations and assumptions were “reasonable”.

The extent to which Ulster Bank has given up on DTAs offers the clearest indication of how internal profit forecasts had declined in recent times, before NatWest confirmed last week that it will begin a “phased withdrawal” from the Republic over the coming years.

The decision was based on the estimate that the Irish unit “will not be in a position to achieve an acceptable level of sustainable [profit] returns over its planning horizon”, NatWest said.

The weaker outlook comes amid ultra-low interest rates internationally, challenges faced by Ulster Bank in rebuilding its loan book after contracting by more than half in the past decade, and the impact of the Covid-19 pandemic and Brexit on the economy.

The DTAs charge was taken before the wind-down decision and does not reflect any estimated impact of that move.

Combined with Ulster Bank setting aside €281 million to absorb an expected surge in bad loans as a result of the Covid-19 crisis, the DTAs charge pushed the bank into a net loss of €431 million last year, according to the report. This compares with a profit of €4 million for 2019.

AIB, Bank of Ireland and Permanent TSB had €3.11 billion of DTAs on their balance sheets as of the end of last June, according to their most recent filings. All three will report full-year results next week.

Meanwhile, Lloyds Banking Group revealed in its annual report this week that it has failed to convince Her Majesty’s Revenue and Customs that it is entitled to claim tax relief on massive losses racked up in the Republic during the financial crisis.

Following a long dispute on the issue, the British bank has decided to appeal the decision to the UK’s First Tier Tax Tribunal, with a hearing expected in early 2022.

The bank faces a total £1.08 billion (€1.26 billion) financial hit if it is unsuccessful in its appeal, comprised of a potential £810 million accumulated tax bill, including interest, and loss of £270 million of so-called deferred tax assets (DTAs). DTAs are essentially the use of past losses to lower future tax bills.

Lloyds inherited Bank of Scotland’s €32 billion Irish loan book under its rescue takeover of HBOS in 2008.

The group handed back its Irish banking licence to the Central Bank in 2010 and began to sell off its mainly impaired local loans at deep discounts. The bank offloaded its remaining €5 billion of Irish mortgages in 2018.