Trio found guilty of conspiring to hide accounts from Revenue 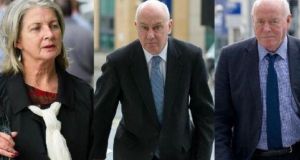 Three former Anglo Irish Bank officials will be sentenced today after being found guilty of hiding accounts from Revenue more than 10 years ago.

All had pleaded not guilty to the charges.

Daly and O’Mahoney did not react when the verdicts were read out, but Maguire wept, and when the judge announced she would be remanded in custody, she became distressed.

All three were found guilty of conspiring to destroy, mutilate or falsify documents relating to accounts of John Peter O’Toole, the brother-in-law of Seán FitzPatrick, former chief executive and chairman of the bank.

The two could face a sentence of up to five years on that count alone.

The remaining charges are of conspiracy and Judge Patrick McCartan will have to make his own assessment of sentencing.

The delivery of the verdict was delayed after an anonymous phone call to the Director of Public Prosecutions’ (DPP) office alleging the wife of the jury foreman was a friend of Maguire.

An application was made to discharge the jury, but the judge rejected it.

When asked by the judge if his wife and Maguire were friends, the foreman said “no”.

Applications to allow the three to be remanded on bail pending sentencing were also rejected by the judge.

He said the primary consideration was that they had been found guilty.

Referring to the anonymous call to the DPP, the judge expressed considerable concern.

He said he did not ascribe any responsibility to the defendants for what occurred, but it was an indication of the mischief that could be created.

He said he was not prepared to take that risk.