The bailout cost €64bn. So use the AIB flotation to help rebuild Ireland

Don’t use IPO proceeds to pay off public debt, whatever EU rules say 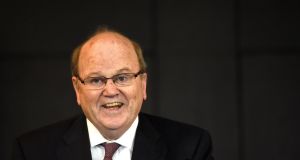 On Monday Minister for Finance Michael Noonan said the snap general election in the UK would not derail plans to sell a 25 per cent stake in Allied Irish Banks via a stock-market flotation. The first window of opportunity for the share sale would open between mid-May and early July.

On Thursday the bank will issue a trading statement to update the market on its performance in the first quarter. The message will be that the bank is in good shape, with its portfolio of nonperforming loans reducing and its lending increasing. AIB will host its agm later that day, when its message to shareholders is likely to be a familiar one: “We’re ready for our initial public offering, but the timing is a matter for the Minister.”

Barring a shock win for Marine Le Pen in the French presidential election, it will be all systems go for the bank’s IPO

Barring a shock win for Marine Le Pen in the French presidential election next month, it looks as if it will be all systems go for the bank’s IPO.

The State’s 99.9 per cent stake in AIB was valued at €11.3 billion at the end of 2016 by the Ireland Strategic Investment Fund, which holds the shares for the Government. But that was a desktop exercise, reflecting in part the reduction in European bank shares last year. The State is likely to net somewhere between €2.5 billion and €3.5 billion from the share sale. So what should we do with the money?

In a recent answer to a question from Mick Wallace, the Wexford TD and former property developer, Minister for Public Expenditure Paschal Donohoe said that EU fiscal rules mean the proceeds cannot be fund increased expenditure, whether it is classified as current or as capital. “Therefore there will no increased capacity for spending following any sale of bank shares,” he added.

Wallace has argued that the Government should seek a dispensation to use the money to invest in infrastructure, especially housing. He cited a call from the Think-tank for Action on Social Change, in December 2015, for some of the bank proceeds to be used for such purposes. “There is an unanswerable case,” it said, to use them “for investment in public infrastructure and not in debt repayment.”

The leader of the Labour Party, Brendan Howlin, recently called for the IPO to be put on ice until the EU’s stability and growth pact rules were changed to allow for the money “to be invested in much-needed capital infrastructure”.

Sinn Féin’s finance spokesman, Pearse Doherty, opposes the AIB sale and has criticised the lack of Dáil debate. He wants any proceeds to invested in social housing, third-level education, rural broadband or other capital projects, to catch up, he said, with a decade of lost investment and to prepare for the projected increase in our population.

He also wonders why the Government isn’t prepared to argue its case with the European Union for flexibility with the vigour it has applied to its appeal of the Apple tax ruling.

The Fine Gael MEP Brian Hayes, a former junior minister at the Department of Finance, has also weighed in, arguing that the proceeds should be partly used to fund our future pension obligations.

“There is a pension time bomb coming down the tracks that we need to face up to,” he said. “We currently have one pensioner for every four workers. By 2060 there will be one pensioner for every two workers according to CSO projections. We need to start preparing for the huge impact pension provision will have on the State’s long-term financing needs. Putting money aside now makes sense.”

Hayes noted that our debt-to-GDP ratio has fallen from 123 per cent in 2013 to a manageable 75.4 per cent today. The Government has set a target of 45 per cent, well below the 60 per cent required under EU rules on the basis that we’re a small, open economy and need a cushion against a future crash.

EU rules or not, there is already a precedent for using the AIB proceeds to fund productive investments

EU rules or not, there is already a precedent for using the AIB proceeds to fund productive investments. In 2015 the State received €335 million from the disposal of its shareholding in Aer Lingus to the Willie Walsh-led International Airlines Group.

This money went into the Ireland Strategic Investment Fund’s Connectivity Fund. Last week it emerged that this subportfolio has loaned €10 million to Shannon Group to help upgrade the runway at Shannon Airport.

This will be the third project to benefit from the Aer Lingus cash: about €22 million was committed to Aqua Commsfor a transatlantic broadband cable, and €35 million was spent on interest-bearing bonds issued by DAA, the State-owned operator of Cork and Dublin Airports.

Why not create a similar fund for even part of the AIB proceeds, to provide financial backing, in partnership with other investors if need be, in housing, public transport, motorways, water services or third-level education?

All of these have the potential to reap a long-term dividend for the State. More importantly, taxpayers could also see some tangible benefit from their €64 billion bailout of the banks.

1 Opioid executive admits to ‘no morals’ ahead of prison term
2 Who are Ireland’s 17 billionaires?
3 Are there annual limits on inheritances or gifts to a child?
4 South Dublin Credit Union members urged to borrow more to ensure survival
5 NI businesses fear burden of post-Brexit red tape on goods transport
6 From chips to €14bn in trade: Ireland and Italy’s enduring exchange
7 American YouTubers embrace the crisp sandwich
8 ‘If you don’t like challenges, you should not be in the airline business’
9 Fallon & Byrne founders McHugh and Byrne exit group
10 Cathay Pacific to resume Dublin-Hong Kong flights in March
Real news has value SUBSCRIBE