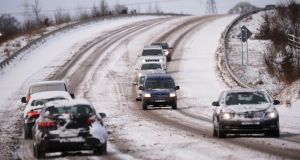 Damage caused by Storm Emma, which collided with the “Beast from the East” weather system earlier this year, is estimated to have cost Irish insurers €39 million.

The figure, provided to The Irish Times by industry body Insurance Ireland, is below the €45 million estimated final tally for successful insurance claims stemming from Storm Ophelia, which struck Ireland last October.

The east of Ireland bore the brunt of Storm Emma when it combined with the “Beast from the East”, a polar vortex from Siberia, to result in the heaviest snowfall in Ireland in 50 years and virtual lockdown in large parts of the State.

Last Month, FBD Holdings, Ireland’s only indigenous, publicly-quoted insurer, said in a trading update that Storm Emma would result in a net loss to the company of just under €7 million. It said on May 5th that it had received over 1,200 claims to date, predominantly in the east and south of the country, as a result of the damage caused by the weather event.

FBD said at the time that its own catastrophe property reinsurance programme had worked well to protect the company and mitigate the net impact of the storm.

Storm Emma is well down the table of most costly weather events for insurers so far this century. A general freeze across Ireland in January 2010 resulted in €297 million of insured losses, according to figures previously provided by Insurance Ireland.

Flooding in November 2009 resulted in €244 million of losses, while a freeze in December 2010, around the time Ireland was entering into a €67.5 billion international bailout, resulted in a €224 million setback for the sector.