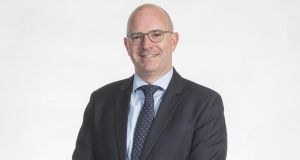 FinTrU founder Darragh McCarthy: “The worst advice was the idea is more important than the client.”

Growing up as the son of a cattle dealer in west Cork in the 1970s and 1980s, Darragh McCarthy thought there had to be an easier way to make money. Drawn to financial markets, he started in Morgan Stanley in 1994 where he remained until late 2012.

The following year, McCarthy founded FinTrU – aiming to create high-quality professional employment in Ireland. The financial services company provides cost-effective resourcing solutions for global investment banks and currently employs 250 staff at its two Belfast offices. In its initial 21 months, FinTrU created 80 jobs, then announced plans to create another 160 within five years. However, that plan had been fulfilled within 12 months.

The decision to set up in Belfast was determined by the availability of well-educated talent coupled with support from Invest NI. Those factors, McCarthy believes, enables the company to offer a competitive alternative to the traditional market offerings.

The privately-owned company aims to grow further still, and plans to create jobs both in Belfast and in other locations in Ireland.

What light-bulb moment prompted you to start up in business?

There was no singular light-bulb moment for me. The main drivers were the desire to be an entrepreneur and to create employment on the island of Ireland.

What was your “back to the wall” moment and how did you overcome it?

I had a partner when setting up FinTrU and he failed to deliver his support as promised in the initial months. This made me refocus on prioritising business development and FinTrU becoming more independent. Thankfully I subsequently bought out the partner’s share in the business.

What were the best and worse pieces of advice you received when starting out?

The best advice was to delay taking external capital as long as possible. The worst advice was the idea is more important than the client.

FinTrU is currently a privately-held company and intends remaining as such with no intention of taking external capital. FinTrU is a very profitable company and very conservatively capitalised. All future growth with be funded through retained earnings.

How are international political developments such as Donald Trump’s presidency and tax reform, along with Brexit, impacting on your business?

US tax reform has limited impact on our business but Brexit has, indirectly, been a major boost as many of our clients look to relocate processes and services from the City of London. I also believe that potential overheating in demand for financial services in Dublin will also bolster the financial services industry in Belfast, given the geographical proximity.

What is the one piece of advice you would give to government to stimulate the economy?

Change the tax system for entrepreneurs. Look at the entrepreneur tax relief available in the UK.

Too much focus on business development of new clients to the detriment of business delivery for existing clients. It is vital to get your first client but once you have the client, it is even more vital that you don’t lose them.

My wife. Katrien is my university sweetheart and my business partner at FinTrU, where she serves as chief of staff. She supported me through my “big bank” career at Morgan Stanley and strongly encouraged me to pursue my dreams in creating FinTrU.