Banks fail to reach deal due to disagreements over pricing 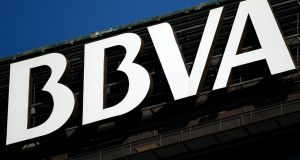 Spain’s second-largest bank BBVA and smaller rival Banco Sabadell scrapped plans for a tie-up that would have created a top player as the industry struggles in the economic fallout from the coronavirus pandemic. Photograph: AFP via Getty Images)

BBVA and Sabadell, the Spanish banks, have given up merger talks they had confirmed less than two weeks ago because of disagreements over the pricing of the deal.

Sabadell said in a statement to Spain’s securities regulator that its board of directors “has decided to terminate the above-mentioned discussions, because the parties have not achieved an agreement on the exchange ratio of both entities”.

In a separate statement, BBVA said that the “conversations in relation to a potential merger transaction with Banco de Sabadell have come to an end without having reached an agreement”.

Sabadell has expressed its interest with merging with another Spanish bank for months. Its plans to join forces with BBVA had been seen as completing a crucial round of consolidation at a time when Spain’s lenders face a rise in past-due loans because of the pandemic-induced economic crisis.

Sabadell has a market capitalisation of €2.3 billion compared with BBVA’s €24.5 billion.

Together, BBVA and Sabadell would have accounted for about 20-25 per cent of the domestic market’s loans, deposits and mutual funds. That compares with 25-30 per cent for a proposed tie-up between CaixaBank plus Bankia, whose boards next week are likely to approve their own merger, and 15 per cent for Santander.

But BBVA, which last week agreed to sell its US assets to PNCBank in an all-cash deal for $11.6 billion (€9.7 billion), has stressed that acquiring Sabadell was merely one of several options.

“There is no certainty that a decision will be taken,” Onur Genc, BBVA chief executive, said last week. “We are very early in the process and we are starting the process of analysing.”

“We don’t feel forced to do anything,” Mr Genc added. “We already have 15 per cent market share in Spain”, which he said is above the minimum efficient scale required to operate successfully in a country.

“We will only do it if there is value for shareholders.”