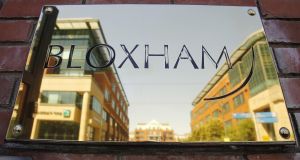 The insurer applied earlier this year to the High Court for leave to re-enter proceedings, initiated in 2009 against Bloxham, for the purpose of seeking judgment for €4.9 million arising from the 2011 settlement. Photograph: PA

A solicitors’ insurer can pursue its application for judgment for €4.9 million allegedly outstanding under a 2011 settlement with Bloxham stockbrokers, a High Court judge has ruled.

The January 2011 settlement was made in proceedings over heavy losses suffered by the Solicitors Mutual Defence Fund (SMDF) Ltd fund after investing in a bond which fell 97 per cent in value.

SMDF, now R & Q Ireland Company Limited by Guarantee, claims it lost almost all of its then reserves of €8.4 million due to the negligence of Bloxham, which collapsed in 2012.

Its chairman Patrick Dorgan said in an affidavit it had to get a €5 million guarantee from the Law Society to protect its position, ceased offering indemnity to solicitors in 2012 and is now in run-off. It ultimately had to apply to Society to fund a rescue package of up to €13 million and finalised a run-off agreement with R&Q in November 2016.

The insurer applied earlier this year to the High Court for leave to re-enter proceedings, initiated in 2009 against Bloxham, for the purpose of seeking judgment for €4.9 million arising from the 2011 settlement.

They argued a High Court order of January 31st 2011, made when the settlement was announced, stated the proceedings were “struck out with liberty to re-enter” and the words “struck out” prevented any matter other than the original cause of action being re-entered.

The SMDF argued the proceedings could be re-entered for the purpose of seeking judgment.

In his judgment on Thursday on the re-entry application, Mr Justice Denis McDonald said a court order made by consent must be construed by reference both to its terms and the specific context in which it was made, in this case, the backdrop of the settlement agreement.

The words “struck out with liberty to re-enter” signalled the court was to have a future role and the striking out of the proceedings was “not intended to terminate them entirely”, he said.

At the same time, it cannot have been intended the proceedings would be re-entered with a view to allowing the original claim be relitigated, he said. It would be “inconceivable” that a court would allow parties to proceed in that way without some detailed explanation.

The court can only proceed on the basis liberty to re-enter was given for some other purpose and, in that context, it was “entirely legitimate” to have regard to the underlying settlement agreement.

The words liberty to renter were “plainly there” to give effect to the provisions of that agreement, he held.

The parties to the agreement had agreed, in default of payment of any instalment within seven days of the due date, the plaintiff had liberty to re-enter the proceedings and obtain judgment for the sum then outstanding, he said.

It followed the plaintiff is entitled, subject to any defences the defendants may legitimately raise, to re-enter the proceedings with a view to pursuing its entitlements under the settlement agreement, he ruled.