RSA’s Irish business returns to profit in first half 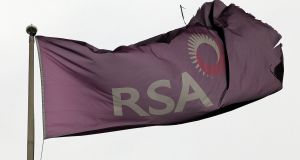 Net premiums for RSA’s Irish division rose by 1 per cent to £152 million in the six months to June 30th. Photograph: Simon Dawson/Bloomberg

British motor and home insurer RSA posted an above-forecast operating profit of £360 million (€402 million) in the first half, led by strong performances in Canada and Scandinavia, it said on Wednesday. Its Irish division, hit by an accounting scandal in 2013, returned to profit, but the insurer warned that the market in Ireland remains challenging, in particular for claims inflation.

Net premiums for the group’s Irish division rose by 1 per cent to £152 million in the six months to June 30th, as the insurer reported a profit of £2 million, up from a loss of £1 million in the same period in 2016, and a combined ratio of 98.8 per cent.

The group said: “In Ireland we continue to target a return to operating profit for the full year 2017, although the market remains challenging, in particular for claims inflation.”

RSA was Ireland’s biggest insurer but ran into difficulties in late 2013 when a number of accounting and financial issues emerged. This led to the suspension of three senior executives, including the then chief executive Philip Smyth, and the RSA group injecting more than €400 million into its Irish subsidiary. RSA Insurance Ireland reported a loss of €198 million in 2014.

Operating profit rose 15 per cent from a year earlier, RSA said. Analysts had forecast operating profit of £338 million, according to a company-supplied consensus forecast.

Best known in Britain for its More Than brand, RSA has been selling businesses and cutting costs under chief executive Stephen Hester, the former boss of Royal Bank of Scotland, who joined in 2014 to overhaul the company.

“While RSA is now measuring against higher performance standards, there is much more that can be done to improve,” Hester said.

RSA’s combined ratio, a measure of underwriting profitability, strengthened to a record 93.2 per cent. A level below 100 per cent indicates a profit.

The firm’s Scandinavian and Canadian businesses did well, despite some large losses in Canada, RSA said.

However, group underwriting profit for RSA’s UK business dropped nearly 80 per cent to £17 million following an unexpected large cut in the rate used to calculate personal injury claims, pushing up the size of those payments.

RSA said it would pay an interim dividend of 6.6 pence, up 32 per cent but below a forecast 7 pence. – (Additional reporting: Reuters)